Still awake. My sleep patterns are more disrupted by this situation than the whole 9/11 thing, probably because it's an ongoing struggle, not so much of a "flash and crash" disaster.

Glad to have you found, sir.


Wind chimes outside are over-sounding the noises inside... just key-clicks, and computer fans at the moment.

I'm in a mood to go out and walk in the dark, but can't, because I'm still tethered to the home-office due to call. It's been a surprisingly quiet night for missing people. I suspect that the phone will be rather tricky in a few hours, because the office is closed for the holiday, but people will still call.

We've been getting a lot of calls for the Florida Marine Patrol.. I think someone's telephone directory has us listed there by mistake, or on a line just above or below where the other one should be. 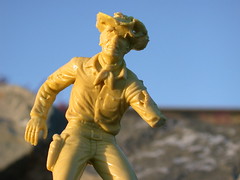 I have this cowboy in Orange, somewhere.


Random Thought - it's be kind of neat to get a temporary tattoo that looks like an iron-scorch (when you leave the too-hot iron on a cotton shirt... does that even happen anymore, or is it just on 60's sitcoms?)

Hmm.. So far, I've mostly learned words for food, and baseball. I like the cookies at the China Panda, because they have a faint citrus taste to 'em.

Dinner was a splurge, because I'm under house arrest for the who weekend. I got General Tso's Tofu (extra crispy and spicy). Yum... also, the broccoli was plentiful and super-fresh.


Talked to bro briefly last night, and he sounds a little congested. He's taking sleep meds and stuff for depression, and I'm concerned that there will be abuse of one or both of those. He seems quite lucid at the moment.


"There is an Indian Belief that everyone is in a house of four rooms: A physical, a mental, an emotional and a spiritual. Most of us tend to live in one room most of the time, but unless we go into every room everyday, even if only to keep it aired, we are not complete." - Rumer Godden

Now I'm feelin' kinda drunk, brother
Be a wearin' jake socks after awhile
You know they call them iron socks
You know, I bet you don't know one from the other,
brother, which is the other?

It's a song from the 30's about alcoholic nerve disorder with a kazoo backup. What's not to love?

In the 1930s, though, a specific affliction struck moonshine drinkers in a number of Southern states. It is estimated that some 50,000 people were crippled with partial paralysis, mostly in their legs, as a result of drinking "jake". In some cases the paralysis proved to be temporary, but nearly all victims were forced to walk with in high-stepping, foot-slapping style that quickly became known as the "jake walk" or the "jake leg".

Pretty interesting, to me... I've read about "Jake leg" in a number of pulp stories, but it never alluded to a result of drinking... I thought it was slang for polio until I read up on it here.

Many thanks to Firpo for the basic info and tune(s)! Every bit of music I've gotten from you has been a pure delight. (Sheep, Sheep, Don't You Know the Road will be coming in a future entry, to be sure.)


"Brownie, you're doing a heck of a job"

Also - "A society is measured by how it treats the weak and vulnerable", said George W. Bush in his State of the Union of Feb 2, 2005

Funny how civilians have done so well to help, but the government has screwed up at almost every turn.


Immersive Learning is a pretty fascinating subject. I've long suspected that this sort of thing could work, but have never seen it documented in a friendly wiki format. I wonder how much Spanish Danny picked up from Guatemala that way?


Lj has a community just for peeved librarians.

library_mofo.. where was this when I worked at the BBCL and Bookstore? I still qualify as a researcher/civilian assist type, so I've joined it. Looks like a nifty community.


Mystery of the baby jellyfish ( Collapse )

4 years ago - That crazy Anne Heche interview, and pygmies are real!