Random Video of Newt and I listening to birds outside

also, I have to get a new battery for the laser pointer, so I can mess with Newt like this some more.

Heard from an old High school pal who used to hang out with Steve Jacoby, Brent Ashland and Me. Clayton was the reason we had all the cool Print Shop signs in our Raiders of the Lost Sock movie. We're talking 8088 IBM PCs, and Apple ][+ era stuff. He found my lj on a google search. For Taco Viva.


Scooby Doo, Where Are You? just wouldn't work without Ted Nichols' musical scores. Yes, it's the same couple of themes recycled over and over again. But too much of a good thing can be wonderful.

One Small part of the Scooby Doo Case Files.


Cool icon of the moment -

Moment of Lyric: (Thanks for the Monday morning pick-me-up, Dani!)

Sometimes the little things start closing in on me
When I'm feeling down, I wanna lose that frown
I stick my head out the window and look around
Those crowds don't scare me, they can't disguise
Its magic that's happening right before my eyes


Had a nice lunch out with Jenjen (She paid, even!) We talked about work, kids, technology, and danced around politics. Helped her especially with Bittorrent and RSS feeds. She put me on a few leads for grants, too. She's put on a little weight since she moved back in with her parents (with her husband, while the house gets fixed up) and i think that it's in no small part because it grates on her nerves. I'm glad to hear her hubbie is sounding better than he was at last report, and we laughed about WB and his crew getting audited by the IRS.


Quote of the moment -

But then they danced down the street like dingledodies, and I shambled after as I have been doing all my life after people who interest me because the only people for me are the mad ones, the ones who are mad to live, mad to talk, mad to be saved, desirous of everything at the same time, the ones who never yawn or say a commonplace thing, but burn, burn, like fabulous roman candles exploding like spiders across the stars and in the middle you see the blue centerlight pop and everybody goes "Awwww!" 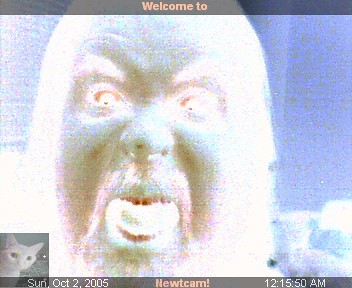 2 years ago - Prop2 gets nuked, poop in the pool, decade old posts by Scotto to Usenet, Hala attacked by the carnivator, I find out that I need surgery, chimp & the woman

3 years ago - net's a little poopy, Finn drama at work