Ugh... Monday already? Monday work meeting and then a dog & pony for FDLE at 10.

Holy cow... why did I not know until yesterday that there was a live action Toei Spider-man TV show in Japan (Circa 1978), where he apparently had a neato motorcycle, instant change suit wristband (a-la the flash's ring), could talk to spiders, and had control over a giant robot? I guess it makes sense, since he was a gadgeteer, (building webshooters and spidey-tracker, anyhow)... In Japan, I think that if you can wire up a tesla coil, you can have a giant robot. Spidey's Opening Title on youtube -and a short but entertaining clip from the show... I need someone to translate either the Japanese, or the Spanish Subtitles. Graypumpkin, maybe? The Toei version looks a lot more entertaining than the lame American live-action version.

From the same guy that has me singing the dang Iron Man theme again. (the cool 1966 version, not the longhair rock star 1996 one.)


Hey, there's an Ambush Bug for Heroclix! A shame I really stopped playing a year or two ago. That's the first one that would have me actively seeking it out (now if they got a Morrison Doom Patrol collection out, I'd be stoked, too)


Moment of Lyric: (Mp3)
There was a boy who knew he could be anything that he wanted to.
Everybody told him he had a singular special destiny.
Everybody said he'd go far--everybody said he'd be a star.
They said he could be anything he wanted to be--then he turned into me.
Now it seems increasingly unlikely that I'm gonna grow up to be Luke Skywalker--not gonna be Indiana Jones.
And after all this time it's probably not gonna turn out that I’m the super-powered heir to a world that isn't there anymore.
But somebody told me I was special.
Somebody told me that I could be anything I wanted to be.
How could they have known the dreams I had were not the dreams they had for me?
They said I could be what I wanted--they had no idea what I wanted.
And I don't mean to seem ungrateful for all their encouragement and praise.
I just meant to say that I don't intend to stay and spend another wasted year, cause at the end I bet I'd still be sitting here wasting time and waiting.
I'm waiting for my Lady of the Lake to come and crown me king.
I'm waiting for my rocket to land so I can get my power ring.
I'm waiting for my radioactive meteorite to fall.
I'm waiting but I ain’t got no meteorite at all.
I'm waiting for my story to begin.
I'm waiting for my/ I'm not done.
Don't count me out of it--my story isn't over yet.
I'm not the son of some roman god but anyway I think I'm gonna be okay.
And looking back I find it seems I've always had unlikely dreams but I can't let that stop me now, it's time to grow up anyhow.
And I may not be Hercules but here's my new philosophy: buh buh bah buh buh bah buh bah buh buh
end of song.

2 years ago - dynamic address assigning, Artist under the influence of LSD, My Messy Office

3 years ago - prisoner on the brain, Names, Antarctica, EO-letters

8097-
Originally uploaded by scottobear.On the road again, dear journal. Kid across from my seat is fiddling with a broken teddy bear bank wrapped n tape that he pulled from a victoria's secret bag. 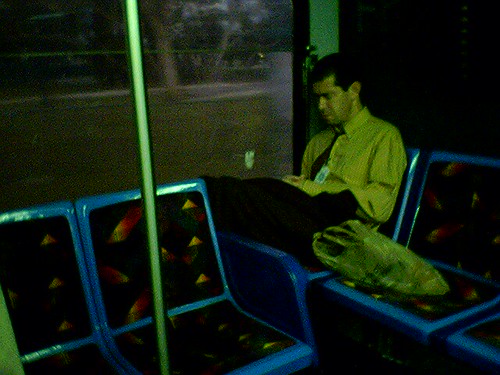 "We're Ants!" guy is trying to sleep in the back, but is scrunching up his eyes so much and sitting so stiffly that it seems more like he's avoiding horror than getting any rest. He appears to be wrapping himself pretty tightly.

Woman eating an egg and bacon sandwich, the meat is rubbery, she pulls on it, stretching until it breaks, snapping into her mouth. I get a distinct hyena/carrion vibe.

Bro's pal Andy was arrested today. He's under wraps until September 26 for that grand theft charge and "resisting a merchant"... I'll have to look that one up.

I really hope that means bro will keep his nose clean for a little while.

Is the patch of Federal Highway that I ride down, curving a little inland and a little closer to the coast now and then every day the result of some deer running through high grasses to avoid a panther?


Of course! Why didn't I think to get my grappling hook on Amazon? Good thinking,

Not my fave episode, but the spirit of jazz makes me happy.
Collapse