Odd, considering yesterday's news, that I took Wilt and the Momster to see The Matador last night (Was going to do Kong again, but a 3 hour movie on a "school night" is a no no for me)...sort of a chaotic film, and I wouldn't recommend it to anyone in particular, but I liked it, after a fashion. Maybe a bit too much of some things and not enough of others.... very vague, but if you've seen it, you probably know what I mean. About an assassin for hire, not an actual matador. Not quite a comedy, not quite a thriller... great acting by both leads.

The sheik he drove his Cadillac


May get together with Kev on Saturday for a FP with Tomi if good fortune and a lack of taking call holds. That'd be so very 1986 of us, all together! Tomi's usually in Finland, and Kev and I are usually so busy! I've got to think of what movie to watch... Perhaps Die Hard, in the tradition of one of our first FP's?

bubbles!!!
Thank you so much! I adore it, and the confetti made Newton dance. 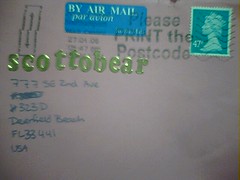 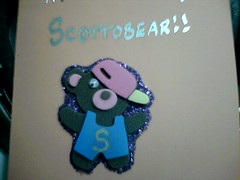 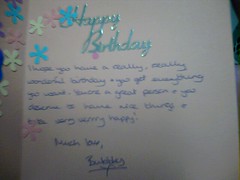 4 years ago - moon/Menstruation connection(or not), dreamy-dreams, elephant talk, pictures, including Newt in a box. Man lives in an airport for 11 years, cousin stuff

5 years ago - Got Birthday arranged to be off, dreams of ancient rome, schedule, shrunken head apples, my first b-day card 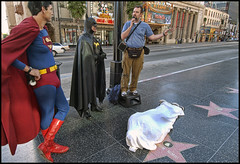 Superman, Batman, Jesusman and the problem of the corpse on Hollywood Blvd.
Originally uploaded by shadowplay.