Didn't do Opa.. maybe next week. The gang didn't gel.

Rosemary'll be here about 9am, which means Newt and I go back to the porch for a few. Might be a tad chilly this time...we'll see.


Written on the bus yesterday morning - 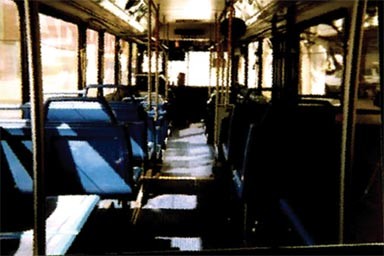 Photo is from an earlier ride, when nobody else was aboard.

I dreamt last night that someone grasped my shoulders, pressed their thumbs into my armpits, and then my chest opened up -- skin pulled back like contact paper on a drawer, a curved metal pair of bands where my ribs should've been opening like french doors. The cavity / cache was warm and dry, no sign of it's biological location at all. A vaguely egg-shaped mechanical device was removed, and another was put in it's place. the newer one seemed like something freshly constructed, clean ceramic with rubber rings, smelled a bit like machine oil. I don't recall the face of the one who did that to me.

Do they make dried olives for cooking or a garnish? Would they be edible?

The bus this morning smells like a combination of car exhaust, cherry jolly ranchers and burger king hash brown rounds. Not entirely bad, and better than it could be, for sure.

More and more folks are using the bike racks on the front of the bus... more often than not, both slots are filled when I get aboard. I may rethink my idea of cycling to the stop, unless I spot a good place to lock it down for the workday.

FORT LAUDERDALE, Fla. - Airport baggage screeners found a human head with teeth, hair and skin in the luggage of a woman who said she intended to ward off evil spirits with it, authorities said Friday. ( Collapse )


Night of the Living Dead in 30 seconds, re-enacted by bunnies.

2 years ago - sleepy day, first taste of Arnold Palmer in a can, Kerry looks like Herman Munster, C words

Hey, neato! My Johari thing has been updated to show breakdowns of usage and such

Created by the Interactive Johari Window on 11.2.2006, using data from 12 respondents.
You can make your own Johari Window, or view scottobear's full data.

Newtcam is active on the porch!