http://veganlunchbox.blogspot.com/ - via the weezle! yummy vegan foodies - they put me onto vegan marshmallow fluff! Fluffernutters are a reality once more!

Hey, I got The Official Handbook of the Marvel Universe as part of my prezzie from sedef and oneeyed. (the original 15-issue series bound in one "phone book"; this was the original OHOTMU. Issues 13 and 14 were the 'Book of the Dead and Disabled',featuring characters and groups who were, at the time, believed dead or inactive, and issue 15 was the 'Book of Weapons,Hardware, and Paraphernalia', featuring technical drawings of Iron Man's armor,Spider-Man's web-shooters and other notable characters' equipment. The back of each issue in the series features a brief Appendix, giving one-line listings for minor and inactive characters.


Are there any classic, purely USA horrors? Vampires, Werewolves, Witches, Giant Monsters, berserk Animals, Frankenstein, Ghosts... all so classic as to be pre-union.

Maybe it's because the USA is such a young country. Slasher/Psycho predator Films are pretty American, but even Fritz Lang had M, but that's a lot different than "Texas Chainsaw Massacre".

Mad Scientists? Stevenson was Scottish and lived in Samoa, I think. I guess 1950's style Alien Invasion? Sort of HG Wells... who was from the UK.

Zombies are pretty American, even if we've had walking dead stories more than 200 years ago.


Florida ren-fest started yesterday... one of the premiums I got for donating blood at FBC was free passes. (along with $15 for Darden restauants - My odds are best for olive garden.) First time donating at Boca rather than Lauderdale was no different an experience, but they have a lot more fun donation loot.

I wonder if Sammy ever got the manatee shirt I sent?


Did a little doodling followed by coloring with crayons this morning. I think that the smell of the crayons was almost more incentive to color than the drawings themselves. Nothing in particular, mostly flow of wrist doodles.


Getting cold in Florida (for Florida, anyhow) cooling to the upper 50s, low 60s today, and dropping into possibly freezing temps tonight from 32-39?

Based on your answers to the quiz, your character’s most likely alignment is Neutral Good.

A neutral good character does the best that a good person can do. He is devoted to helping others. He works with kings and magistrates but does not feel beholden to them. The common phrase for neutral good is "true good." Neutral good is the best alignment you can be because it means doing what is good without bias toward or against order.

--excerpted from the Player’s Handbook, Chapter 6

Went on walkabout for a bit yesterday afternoon, but before I hoofed it, Mom and Wilt came by to drop off some goodies that they were getting rid of... some nifty hand-painted wine glasses and a veggie steamer / pasta pot. I don't drink... wine.


I've been wearing a lot of colored, but plain t-shirts lately. Before this year, I think that all of my t-shirts (except undershirts) had some kind of picture, logo or saying on it... I rather like having some non-descript clothes. More colors than usual, too, not just sweatshirt gray / black / olive drab. Current mix is forest green, navy blue, light blue, maroon, dark rust, and a (perhaps ill-advised) "happy face" canary yellow.

There was a time years ago when 95% of what I wore outside of work were goofy T-shirts. Favorites were the good ol' comic book ones -- Spidey Duking it out with the Green Goblin (actually, I think I got that one as a birthday present from GP and Kat in the early 90s), Nick Fury, Flaming Carrot, Silver Surfer, A few different Matt Wagner Mage shirts, a Doctor Blasphemy, and a Reid Fleming, world's toughest milkman ensemble. Others were a Miskatonic University Alumnus and plain logo, and weirdly (because I didn't much dig the movie) a "Dick Tracy" opening night ticket shirt.

Hm, This Journal entry is a nice combination of boring and dorky, Scotto! Proof positive that I write primarily for myself, because precious few others could possibly care about my t-shirt preferences. Heck, even I might not care a year from now, but for now, I like having comfy clothes that fit, and don't promote anything at all.

If I'm going to be dorky, I may as well put a random picture of a monkey up -

Cowboy Gorilla! Yee-Haw! Speaking of not drinking wine, I think he was a vampire briefly. Vampire Cowboy Gorilla. Yup. He also fought Yarn Man a lot. also, a Badge pinned directly on his pecs seems a bit rough. Ii admire his ability to shoot and whip at the same time, though.


I've got to call Val up and wish her a happy happy - I think she's 48 today. I owe her and Bobby a hello, even without a b'day involved.

2 years ago -goodies from mimi, time out and about, comment time limit, kill the ducky 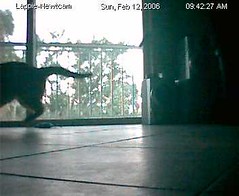 caught in mid-run, the hover cat 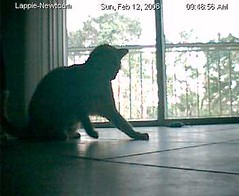 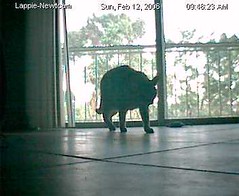 Stalking the ever elusive twisty-tie 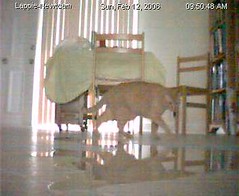