Stayed up late last night playing catch-up for a project. Pesky, because it was due to the big chief promising something under an unreasonable timeline. So, I dug in and ground out some solid code for a template that's going to be live-tested today. A little annoying to be the hero in this situation.. I'm expected to work a miracle as a matter of course, and if I don't, I've let them down for having unreasonable expectations.

Ah well, I got it worked out... wasn't hard, just time-consuming.


Camera on pda went yesterday, too. It'll cost more than buying a better replacement camera, so it looks like I'm going shopping for sure next weekend. I'd rather have a higher-quality camera that isn't integrated into the clie than a fuzzy one that is just a component. I don't need a great one, just something that does decent snapshots and has a movie mode, preferably. Small size would be good, too.

There's something a lot more sinister when you her the phrase "try to take over the world" in deep-voiced German.

Dang, the song tapper really works! it figured out Everybody Needs Somebody To Love by the Blues Brothers and Build Me Up Buttercup by The Foundations.

3 years ago - bro got me some Godzilla movies at the gift store up the road. I wonder now if they were purchased, or picked up with a five-fingered discount?Is every memory of him going to be recolored by what I know now?Probably, until my mind comes up with a fresh tint for him, later on in the game. I know that my memories of other folks are surely in varying shades, too. 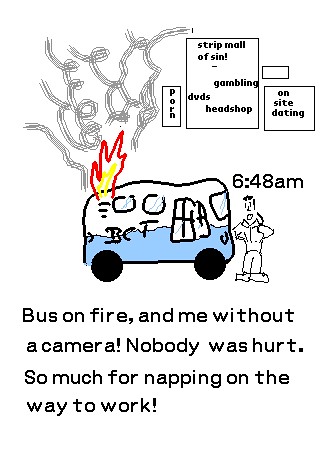 day one without camera, bus on fire. the route 95 caught fire, and we

stopped to take on passengers. (we were on the route 10, and stopped at the

pompano mall, across from the strip mall of sin.