The future looks bright and shiny. I'm pretty dang giddy about the whole thing. Stayed up late last night talking out plans and reflecting on possibilities. I'm ready to get rolling with it fairly immediately.

I'd still really like it if there was a hardy green metal, (not just weathered copper) but I don't suppose the GLC is going to help me there.

Hmm.. the new toy has some potential.

Use the psp as a stealth cam / internet phone and geocache toy? All of those are something worth sniffing out. I seem to like it for everything (multimedia/web-surfing) *but* gaming, which is just gravy.


While sitting at your desk make clockwise circles with your right foot.

While doing this, draw the number "6" in the air with your right hand.

Your foot will change direction.


All bus and train service is out today, so I get to work from home! (Broward County Transit (BCT) will resume service at Noon weather permitting. Buses will operate on their Sunday/holiday schedule. Paratransit services will also resume at Noon. Tri-Rail trains will not be operating on Wednesday. Regular Tri-Rail passenger service is expected to resume service tomorrow morning) I wonder how many folks are staying in?

Big Kahuna is going into the office, and I'm taking call from the house... everyone else is free as a bird today.


2,905 Broward county folks lost power (as of 11pm) but I was unaffected. (total of about 6800 in miami 7,862 customers without electricity as of noon Wednesday, most of them in the tri-county area)

At 5 a.m. ET, Ernesto was about about 45 miles southwest of Miami and was moving north-northwest near 8 mph.

Ernesto's top winds remain near 45 mph, and it could be downgraded to a tropical depression later in the day. The storm is expected to remain over Florida for a day, weakening but still producing rainbands containing strong, gusty winds.


Though weather was calm, we did get funnel clouds in Deerfield - via local10

Hurricane Katrina Anniversary Tree Planting Ceremony - Due to the impending approach of TS Ernesto, this meeting has been canceled.

According to Maryland veterinarians, there is currently a shortage of canine blood at the Eastern Veterinary Blood Bank (EVBB). The number of blood donations tends to drop in the summer, although dogs still have accidents and illnesses that require transfusions. In order to get inventory levels back above safe available levels, vets are putting out the call to Maryland's dog owners for donations. Canine donors must be healthy, between nine months and eight years old, and weigh at least 35 pounds; the entire procedure takes about 10 to 20 minutes. And it's great to know that donations go to good use—last year, donations made in Maryland were used to help dogs who were injured during Hurricane Katrina and its aftermath. 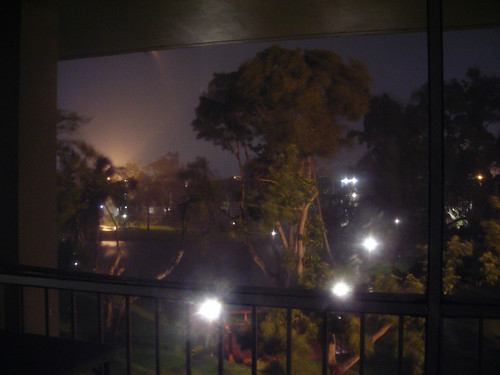 Last night's view of the back yard as the wet bits of Ernesto rolled in. I hope the iguanas are doing ok.

4 years ago - wonka, hypno powers, got my computer desk