Yesterday, I saw a goggle-wearing dog, and some fish.

Putting in my notice at work today. Time to move on... Greener pastures await. They now have folks I can train to take care of business, so no guilt here. I'll be interested in seeing what the response will be, as they fairly thought I'd stay until removed with a crowbar.

Two weeks from now, I'll be en route to Maryland, and the condo will be a seasonal rental, and we can vacation there off-season. Bro has no idea I'm leaving the state, as I've not really heard from him in a few months.


More pictures from yesterday... bhk in awe of the goodyear blimp, big red the iguana & friend, silly faces, sunset in the back yard

At swensens, the wait staff asked me to help them with a power issue after we got our ice cream digested.. turned out the circuit breaker was flicked over, but we got 'em up and running in no time. They were very thankful and cut the cost of our meal. still a bit miffed over the lack of spanish peanuts or proper wafers. I think that we might try another swensens later, as one of our waitresses (we had two... it was a slow night in there, and they just traded off) confided in us that there were some items that they had on the menu that never ever got ordered - Wafers and whole peanuts amongst 'em. 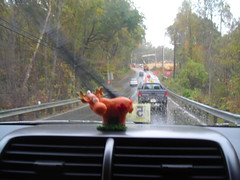 His voice is pretty dang poncy, but we love him, and he loves us. I may get him to do a voice post for us later on down the line. His South Park-esque eyes and tuque, snazzy orange fur, maple-leaf tattoo and love of pencils where the sun doesn't necessarily shine has endeared him to us, as well as his super duper cheery outlook and personality... like the uncle Arthur we never had.

2 years ago - power out, Danny & the lions, wonder twins, network tools, adp off call, then repeals it, Florida mean to homeless

4 years ago - steal this book, McDonalds Theory of War and Peace, "Big Books", 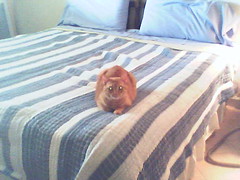 newton of the damned
Originally uploaded by scottobear.

The eyes! The eyes! -Robot Newton from Westworld, maybe! 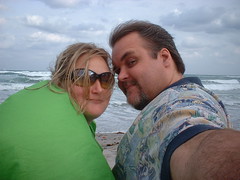 Swept Away
Originally uploaded by blackhellkat.