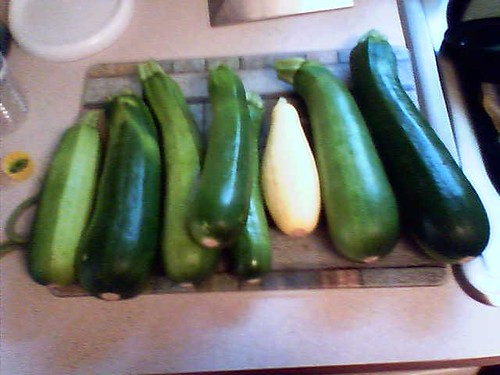 yummy from our garden, originally uploaded by scottobear.

Took BHK and her mom out for Mexican dinner last night, as the mom-in-law is a bachelorette while LB is in Salem, working on the house to be rented. I think CB will head up there with Tigger this weekend, and depending on how our guest plans pan out, perhaps BHK or possibly even the two of us will go up to help straighten things out as well.

I look at the commute to work with planner's eyes lately... which I find funny, due to suspicions that much of Maryland's growth has gone far outside any of her initial city / county-wide designs. The way a tiny village can swell to a small town and even a huge city like Baltimore is a fascinating evolution.

Perhaps it's due to my new job and playing Sim City / Carcassone-type games, but looking at residential areas, how roads, rivers and rail act as amazing connection between homes, churches, businesses, farms, graveyards and whatnot. There are many relationships between people and terrain. I love how almost every church here has an attached bone yard, and how broad the space can appear be between the towns. Sometimes, it's only one road into and out of town, which gives a huge sense of isolation, but also one of knowing that it is connected to *somewhere* else. The fact that I can wander around and see so much history (granted, the majority from the 18th century onward) fascinates me to no end. Sometimes when I look at places in Calvert County, I can mentally see what it was like before older structures weathered so much and the newer structures were put in between (or added onto the elder ones). Still-operating horse drawn buggies driven by the Amish frequently help with the visualization.

There are old bridge pilings without the road-sections across the top near 95 that look like ancient ruins; the new on-ramp doesn't really match the travel route of the old path. I wonder how many abandoned roads and paths were lost once asphalt and gasoline-powered vehicles became the standard?

Sometimes it seems like each little town is made from the same (or at least very similar) parts from the one just before it, up the road a ways. That church was on the other side of the road, and the tobacco barn was brown, not gold... and about a half-mile to the northeast. The whole place was at the foot of the hill, not the top. Sometimes it seems as if the people are slightly interchangeable, as well. Soccer mom with stroller and dog. Old geezer picking up trash on the side of the road. High school kids futzing around.

The Suburbs are different than the Commuter Towns of Bowie and Waldorf... I prefer North Beach to either of those locations.

Don't get me started on the DC roads. I don't blame L'Enfant's great design, as so many others came and revised the plans, but I'll always prefer a two-way travel grid-type situation over curves for major city roads. One-way streets that curve up onto themselves and don't simply run N/S or E/W is just asking for trouble. That said, it is a beautiful place to see.

Tonight's supper of zucchini and squash parm with cheese tortellini and salad was fantastic. The soy flour really holds onto the veggies better than wheat. BHK really did a fantastic job! There's a nice feeling when 80% of what's on the dinner table is grown in your back yard - The only things bought were the salad dressing, cheese tortellini, flour, and drinks. I'm really looking forward to our potatoes and peas coming in soon... I'm also contemplating soybeans and a beehive for next year. And maybe a pair of overalls and a wide-brimmed straw hat. ;)