Lots done at work today... a good ending to the week. I have to get with CS first thing on Monday (or after she's back) about streamlining more processes. I'm pretty pleased with the current learning curve and the gang there thus far.

Outside of work - Autorealm - reminder to self - investigate other uses.

Tonight, we'd planned on a visit to see Sweeney Todd - but the venue wasn't up to the task of seating us. However, we may make plans make it easier in the future. (Thoroughly Modern Millie may have better odds.) instead, we wandered around Annapolis, had a lovely bite to eat at Davis' Pub (the onion rings were especially to my liking) and then went to see the latest Die Hard movie. Not bad... took place in Baltimore / DC (sort of a one globby city) and had lots of explosions and beaten up Bruce Willis in it.

We also got to visit the Maryland Kwik-E-Mart - pictures will follow of this nifty bit-o-advertising later in the week. Our Clerks were I. P. Freely, and Mae B. Drunk.

I would really like to get this... (via ectoplasmosis ) 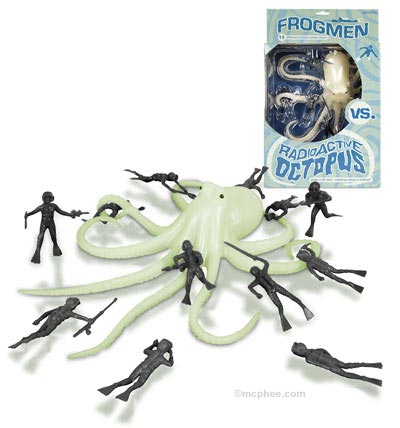 During a routine underwater expedition, these unfortunate frogmen were attacked by a giant radioactive octopus! Will their harpoon guns, daggers and pruning shears be enough to defeat this terror of the deep or will they all be eaten alive? Each set includes twelve, 2-1/2″ hard vinyl frogmen and one, 9″ soft vinyl octopus that glows in the dark!

The great-great-grandson of Prince Otto, Germany’s Iron Chancellor and architect of the modern German state, the young von Bismarck showed early promise as a brilliant scholar, but led an exotic life of gilded aimlessness that attracted the attention of the gossip columns from the moment he arrived in Oxford in 1983 and hosted a dinner at which the severed heads of two pigs were placed at either end of the table.

When not clad in the lederhosen of his homeland, he cultivated an air of sophisticated complexity by appearing in women’s clothes, set off by lipstick and fishnet stockings.

7 years ago - got a nice letter from Christin, Emo Philips