For no good reason, a picture of Alan's rug. 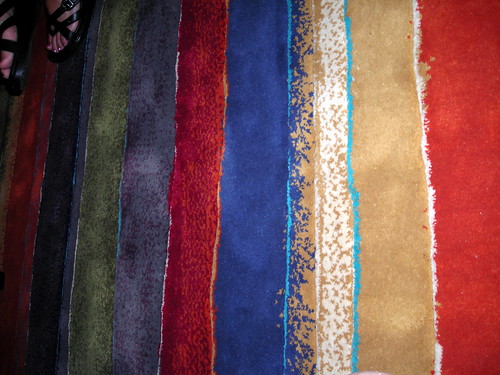 Netforum 2006/01 or /02? Upgrade is looking pretty essential. That's been part of my work lately, reviewing the next build and how well it'll get into place. I just want it to be as seamless as possible... minimise any growing pains.

Being a giant guy has the side effect of being used as a mobile landmark. I've had folks tell their kids that if the get lost, look for me in a crowd. Not for me to babysit 'em, just that my head and shoulders tend to bob above other folks nearby. Also, it appears that I'm one of those "hey, I know you" types. I look both kind and trustworthy as well as looming and scary. I guess it depends on if I've shaved around the goatee and am more awake than walking dead. (In that case, folks cross the street to get away from me.) I've been in Maryland for about eight months now, and my newest gig just one. I've already been invited to a lot of picnics, parties, etc.... I don't think it'll be too long before the combination of North Beach's small-townishness and other friendlies at work spirals it back up to a broader friends base. Right now I'm still a bit of "BHK's Hubby" or "Larry's Son-in-law".

Back in the old days (when I was in high school and thereabouts) I was Mr. connected. Everyone knew me, or knew of me through someone else. I'm not sure how that happened, but I suspect it's a side effect of the landmark issue above. I seldom bothered anyone, and folks rarely gave me any guff. I'm not as connected anymore - living in a new state, new job, etc. This came up during a little message exchange with Sirenity... regarding people who get talked to or "hey do I know you"ed a lot.

Dreamt of a white panel van with the word destruction on it. - BHK and I were hunting down somebody who sold us a faulty bed. We were pretty mad.... I wonder what we were going to do once we got the guy? That has no relation to the sailboat dream where all we had to eat was trader joes snacks that had gone stale. We were trapped on a catamaran with a big bag of stale crisps and candy-coated sunflower seeds... and no clean water.

Picked up a pair of new shirts, and two new ties. I never thought I'd ever own a purple shirt I could wear to work. I *really* never thought I'd ever wear a tie to work. Who knew? I actually enjoy putting on a corporate noose every here and again, even though it's not required wear in the office. It makes me feel a bit more professional and has the sense of a "uniform" to keep me a bit more focused on my tasks.

Sting from the Macaroni Grill wasp has completely faded.. .it really didn't feel like a sting so much as a very brief electrical shock followed by swelling.

Chore Wars lets you claim experience points for household chores. By getting a few people in your house or workplace to sign up, you can assign experience point rewards to individual chores, and see how quickly each of you levels up. Experience points are tracked both as weekly high-score charts, and as ongoing character sheets - every time you rack up 200XP of chores, your character gains a “level”, and their class changes to match the type of chores that they’ve been doing. (here's my character, if you want to invite me to your party )

Random notes on my lj, and communites maintained

pseudofic accounts are all long dormant. Maybe it's time to start up the fish stories account again?