Crashed hard last night once we got back - comfy weekend, sort of like this found shot of Newt from Friday. 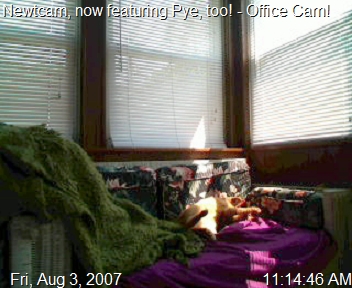 This morning BHK and I lazed in bed for a good chunk, spending a little time reading or fooling on the laptop, before getting up and heading off to points non-bedlike. We played a bit here and there in yucata, superdupergames, tribal wars, and bella sara - I've discovered that I do better sitting cross-legged over laying back with the lappie.

Post-laziness, we headed out for a random road trip, and ended up going to Dream Wizards which was exactly like what we were hoping for (but didn't get) when we hit the Strategist a couple of weekends back. A large gaming area, very well-stocked collection of games of every stripe, and attentive personnel. Of course there was the standard "teen-boy scent" - BHK noticed the was one half of the female population (the male population was maybe 25 or so) - the other a young kid, probably 12-13, playing Pokemon happily amongst the sea of boys. BHK also got to see a low-grade temper tantrum from one of the other players in a tournament... complaining that his purchased booster pack was useless... stomped and slapped the pack down amongst the poor counter-folk. I suspect that he was maybe about a half-hour to an hour to being ejected from the premesis.

I couldn't resist picking up a copy of Polarity (thanks again for the hint, Keethrax!) and Cosmic Wimpout ... a Yahtzee-like dice game I used to enjoy back in high school. I think the last time I played it was about 20 years ago in Mr. Eck's Marine biology class, fourth period. Not sure of the exact day, but it was near the end of the school year in 1987.

Still no leads on the Pirates "Glittery" boosters, like Amy's. BHK must have a giant crab covered in glitter to destroy ships with!

After that, we hit the Home goods store, shopped the Halloween goodies and got a few little household treats.. Some green cups, sugar free blueberry syrup, and Halloween sprinkles for cupcakes later in the season.

We consulted our good friend Zagat, and found an entry marked Lighthouse Tofu - a total wildcard as there weren't enough reviews to give it any scores for service, menu or whatnot. (The link goes to the yelp page, which would've been more helpful, had we thought to look it up first). I think we stumbled upon a local Korean fave... The place was packed and we were the only non-asian couple in sight.

We ordered more than we thought, as everything was served home-style - even though we didn't ask for it, we got an appetiser of Miso soup, followed by a broad assortment of dishes with a little sampling of this and that - Bok Choy in some Oyster sauce that was tasty but quite spicy, some minced garlic in clam sauce, some manner of peppers in a cool/spicy soup, cucumbers (my fave of that lot... sweet and spicy), and some sprouts in sesame oil. - all came before what we had ordered. BHK had the tofu vegetable soup that came to the table still at a rolling boil and served with a raw egg on the side - to be added to the soup manually. I got an assortment of sushi, of which I think the Tofu sushi was the winner. The "prima vera" one of mixed veggies was tasty, but the weakest of the lot - Tofu, tempura lobster, and cucumber all were just amazing.

They serve water with a little green tea added, which is disconcerting at first, because it has an off-yellow/green color that I have seen come out of the pipes in some well water communities - suffice to say that it was clean and delicious. No worries there.

As a palate cleanser, they also serve a little rice cooked in green tea at the end of the meal - I liked it!

Our host was friendly, and I think that he assumed we had never been out to eat at a place like theirs. He was kind enough to move us to another table when we realised our little 2-up location wasn't going to hold all the food we had coming. - and then explained the difference between light and regular soy sauce.. also warned us against wasabe (he seemed pleased when I was enjoying a healthy dollop dipped from same mixed with the soy on my cucumber roll)

Oddly, he didn't give any food consumption tips regarding the egg in the soup, which I think was the most culturally mysterious of the lot.

On the way out, he took me aside, and passed me a pair of strange little bottles covered in text that I couldn't read, and a small oval with larger text inside (picture to follow - maybe I can get talonvaki or pilarcruz to translate it for me).... said it was dessert, and to enjoy.

It looked like milk, and smelled faintly of vanilla, so I shrugged and took a swig. I was not expecting the lemon flavor at all, but it was pretty dang tasty. I don't think BHK was as impressed, but she liked it fine.

Also on the way up and back, we got to see the Mormon Temple which is amazing to watch rise up over the horizon as you approach. The place is huge and beautiful - while lovely, the pictures don't do it justice at all.

We had one last stop before heading home... the in-laws. Chris and Larry did a great job of pickling our cucumbers - about 30 mason jars worth. We won't be needing any store-bought pickle-type product anytime soon. BHK is planning on using the remaining 3 or 4 jars to do some pickled peppers ala Peter Piper, although we don't quite have a peck.

I'm just wondering where we're going to store 30-odd jars of preserved veggie. I guess the garage is a reasonably cool, dry, dark place for 'em. They have to steep in the brine for a brief period before eating. I wonder how long they'll stay good? If you don't break the vacuum seal, I imagine we can store them fairly indefinitely - not sure how long they stay good once that seal is broken, though. I imagine that won't be an issue, as this family loves 'em.

7 years ago - house to myself, foodies