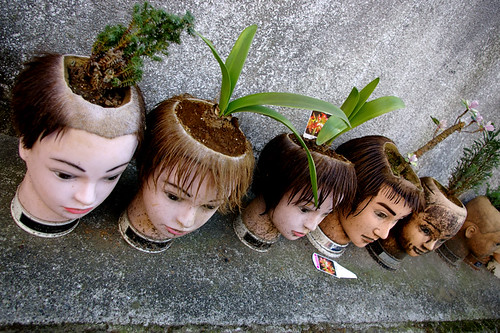 I love it when thought bears fruit.

BHK is my lower case n. I love you, sweetheart.

In a cold and far-off place
There was a lower-case N.
Lonely and cold, she would stare off into space
And it was known that she would cry now and then.

Lower-case N, standing on a hill.
The wind is very still, for the lower-case eh-en...

And then one day a rocketship
Came racing from the sky.
It landed on the hill and there opened up a door
And somethin' started comin' outside...

A lower-case N!
(She's not lonely anymo-o-re)
They are standing on the hill
(There are two of them for su-u-ure)
The wind is very still
For the lower-case eh-en

My office furniture arrived, so I moved into my new office in the "west wing" today. The new office is a little bit smaller and more oddly-shaped than the old one, but placement is good. Two doors from the prez, one from development, and one from the small conference room.
Little Hoff Doll! How cute! How Evil! Clever... wish I'd have thought of it. I think I'm a little more partial to little mr t, however.
Speaking of goodies... One year wedding anniversary is in October... one year is paper for gifts, right? Maybe Zombie Fluxx is part of it this year? It looks like it'll be released before our date on the 25th.
Why is it that whenever someone has a list to choose a favorite color, orange is often left off?
Yesterday, on the ride home, Chris asked if I was always such a serious person. Does she know me at all? I'm pretty confident that I've been a goof in her presence more than a few times... in fact, I thought that my serious discussion had pretty darn goofy undertones.
Two useful sites discovered recently on FF list -

7 years ago - Suzy goes to the Clink