Humpday! Midweek, and it feels it. I was happy to rediscover that we get President's day off next month... Three-day weekends are a wonderful thing. Added bonus is that my b-day falls on a weekend this year, so that Saturday is mine, all mine!

BHK and Cathy got together today to do more straightening and space management at the house. One recent change is the move of the love seat from the office to the living room... newtcam archives show that Pye doesn't seem to mind the change of pace. 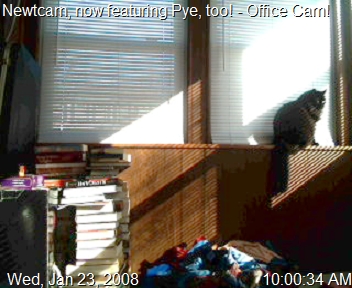 Maybe we'll have room for some bookcases under the North-face windows, with the tops clear for kitty-climbing and general sunning.

Poor Pye must be a little chilly in that picture - he's all fluffed out. Cold, or resting off a horsing around match with Newt.


"After eight years and some $65 million, the state of Maryland is taking its first steps to return to an accountable, paper-ballot based voting system. Governor Martin O'Malley has announced an initial outlay of $6.5 million towards the $20 million cost of an optical system which will scan and tally the votes while the paper ballots are retained as a backup. The new (or old) system is expected to be in place by 2010 — or four years before the state finishes paying off the bill for the touch-screen system."


Had a bit of a nightmare about using the walker last night. Forgive my recycling of old doodles. Dreamt of being poked and prodded, cut open and stapled shut.

Makes me twitchy, just thinking about it. After being cut up, I had to go shopping for tennis balls to put under the walker's feet.

Now I've got the phrase / title Walker, Texas Ranger stuck in my head.


Random Self-portrait of the moment taken in the loo at work - Beard has bypassed the goatee stage for winter.

I still remember the sting of asphalt embedded into my palms after the trip and fall 5 years back.

The voice of my first grade teacher is a strong memory, too.

Also those commercials for free catalogs....

Is the only reason I know a zip code in Pueblo.

I wonder if I'd have the guts to punch a Tyrannosaurus in the face.

He said the sacrifices "included the killing of an innocent child and plucking out the heart, which was divided into pieces for us to eat."

There had been numerous rumours of human sacrifices during the 1979-93 conflict but this is the first time anyone has admitted publicly to the practice.

Mr Blahyi, 37, is better known in Liberia as "General Butt Naked" because he went into combat with no clothes on, to scare the enemy.

He is now an Evangelist preacher, who prefers to use the name Joshua.

6 years ago - I got my camera, Alvin gets fired from work for stealing overtime, unsolved mysteries, snap club, mcd's employees, nifty moon site.

7 years ago - Reflections on the old regime, The Litter Box Song *snerk*, Cow Saliva, "parsley, sage, rosemary and thyme", rehiring some of the fire-ees