Just realized that I never got a call from my bro on my birthday. I haven't heard from him at all since his phone was reconnected. I hope he's doing ok... I imagine that he is.


Watched Hellboy: Sword of Souls over dinner of corn dogs and tater tots! nom nom nom. The movie was just ok.... I like good ol' Hellboy and Co, but it seemed too rushed and way too much time on the pyrokinetic's whining about "blah blah it'll overtake me blah". If they'd just kept it a bit lighter, I'd have liked it more... the scenes where he's fighting an assortment of bad guys got sort of old, too... not sure what I'd have done to make it better.


We had just a teensy snootch of snow today. It was nice to see some falling flakes... they soon turned to light freezing rain. Not as lovely, but nice, too.


The Postal Service says a first-class stamp will cost 42 cents as of May 12. [AP via USA]


Hm, I was wondering how long it'd take for Leslie Nielson to appear in a superhero movie spoof. March 2008, it seems.

Movies I want to see (off the top of my head... I'm sure I'm forgetting some):

No Country for Old Men
Cloverfield
Sweeney Todd (is it still in theaters?)
Darjeeling Limited (Is it out on DVD yet?)
Spiderwick Chronicles
Indy 4
Jumper
Diary of the Dead
10,000 BC


RIP, Steve Gerber. Thanks for Howard the Duck, and Thundarr the Barbarian. Steve's weblog.


Long overdue pictures of Cake and Cats. As always, clicken to embiggen.

since getting the Kitty DVD for Christmas, Pyewacket has been a regular couch potato, watching the tube with us, even if it doesn't show chirping birds, fish, or rodent-type objects. Newton is a fan of the DVD, because that means his little brother is occupied while big brother can nap in peace upstairs, or use the litter box without having a little furry frined knocking on the door, asking if he can come out and play.

Watching the specialty cat video - fish portion - Taken while the tree and presents were still out... I've been very bad about unloading the camera. 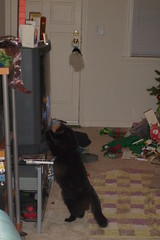 Pye was also attentive watching the Super bowl. He rooted for the Patriots. They lost. It's ok.

He also likes to view psych upside down while having his tummy rubbed. Who wouldn't?

Newton Shamelessly diving into the dryer to be warm. We have to be ever vigilant not to put him on a fluff cycle.

1 year ago - vallies, no 24 with the lads, a little sick, tv watching, acim update from TD

4 years ago - goodies from mimi, time out and about, comment time limit, kill the ducky