Monday monday - back to work! Not much to post about... general purpose day, but BHK picked me up afterward. We met Chris and Larry at Lemongrass - Larry wasn't gaga over it, but the rest of us enjoyed the feed. We parted company soon after - BHK and I hit the store and got the boys a new water fountain and a toy or two. I barely fended off BHK's request for goldfish and crabs and hammies and gerbils and kitties.

ATW man has varied a little from his valentines outfit.. now he has a red wig on, no heart shaped box of candy, and the rose still clenched betwixt his teeth.

If anything, he looks a bit like a grateful dead album cover at the moment. hard to get good detail with the camera phone and a back light, but bigger gets a bit more. 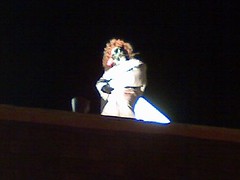 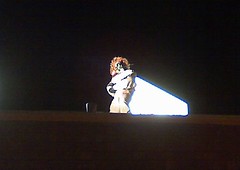 Taking a hint from edbook, six years ago (friends only link) -

1. 'was run over by a car while riding a motor scooter - snapped my collarbone. If the front wheel had been 6 inches to the left, I'd be dead.. 2 feet and I'd have been fine. The car never stopped to check on me, it just kept going. I didn't know it was broken at first, until I called GP on the phone and he advised that I flex my arm. After I unblacked out a moment later on the floor, I went to the hospital. Only bone of mine that broke... unless you count teeth.

2. 'have been every male part of a wedding ceremony, short of the priest. (ring bearer, usher, best man, groom). In that order. Will I be ordained enough to do the last one someday?

3. 'saw at the very least five different kinds of consensual crime performed in under an hour... my last night as a bouncer. The pay was good, but not worth going to jail for... even if nobody there was complaining.

4. 'met my wife thanks to the internet,  livejournal, and an ex-girlfriend.

5. 'got a scholarship to clown college, but opted for computer science... more lucrative, and I don't do well with sawdust-based environments.

6. 'is allergic to cats, but happily fostered and then adopted Newton-kitty when he was 3 weeks old - bottle and rag fed him every 4 hours when he was still in the nursing stage. I now live with 2 cats and don't show allergies much around them, but other animals will give me red eyes and sneezles, until I adapt to 'em.

7. 'worked for an organization that helped to search for missing children. I think that my heart was in the right place, but I'm glad to have moved on. It can be heartbreaking to hear about a kid that didn't make it, or to see petty behavior on the part of an org or the police result in stupidity that could potentially cost a kids life. Plus, I don't like being rattled every time the cell phone rings... now when the phone vibrates, the worst thing is a downed server or a weather issue. It's taken me about a year to get out of fireman-alert / stress mode every time the phone rings. I do feel that the national center is the best place to turn to when a child is missing.

9.'was also in the civil air patrol during Andrew, and got to see how destroyed homestead got... I had a huge amount of pity for the folks in NOLA that I might not have if I didn't see areas of just rubble and water where homes used to be. We got to round up food and water for people out there... it's what I imagine it to be like in an area struck by war.

10.'has offered spiritual advice to people, even though I have no idea what, if anything, is beyond the veil of what we can see. I've helped people through crises of faith and to find a common ground where elements can be conflicted even though I haven't the foggiest about my own faith... and I'm ok with that. I don't know if that makes me a hypocrite or what.

The son’s tooth helps to save dad’s sight

Rob McNichol’s son — also called Rob — didn’t think twice when the chance arose to help his dad to see again by giving him a canine tooth.

Father-of-eight Mr McNichol snr (57) was blinded in a work-place accident, when liquid aluminium exploded in his face in November 2005.

But he can now see again after doctors, using groundbreaking surgery, inserted his son’s tooth in his eye.

The surgery, Osteo Odonto Kerato Prosthesis (OOKP), involved fitting a living canine tooth with an optical cylinder and transplanting it into the eye cavity

The surgery, which costs an estimated €40,000, is believed to be the first of its kind to be carried out on an Irish resident.

Pioneered in Italy in the 1960s, Osteo Odonto Kerato Prosthesis (OOKP) surgery is carried out on patients for whom conventional corneal transplants will not work. It entails replacing a damaged cornea with a live tooth root and attached optical cylinder

John McCain apologized for a supporter's use of Barack Obama's middle name. And rightly so. Only his mother should use his middle name, and then only when he's done something really naughty.