Quite the journey today - We put the March in Ides of March!

We slept in, but got to the doc's in time for my shots and BHK's draw. After the requisite needle sticks, we launched ourselves toward the Eastern Shore once again - original intent of going to Baltimore for the Aquarium was sidelined for a day that maybe we can bring Adam along with us and I've got a non-cellphone camera.

Plan #2 was to go to St. Michael's, now that season has started - check out the marine museum there, and have a spot of supper at the Crab Claw.

Those plans were stymied by a hand-stenciled sign marked "Flea Market Next Left". With a quick mutual nodding of our heads, BHK and I changed course - we meandered through the building, fairly impressed. There was an oven cooking up hot dogs at the front door, along with plates of baked goods... mostly brownies and blueberry-muffin bars. Tools of all sorts, used books, some nifty antiques, too. BHK snapped up a phonebook-thick book of vegetarian recipes for $2, a keen jadeite set of salt and pepper shakers (not antique, but tres cool for $10, and I snagged a blueberry bar for a measly buck. (I almost got a blue-cobalt glass mr. peanut jar, but discretion worked for me. I really had no place to put it.) Fortunately the Salt-shaker guy took checks. (He said that he took credit cards too, but didn't give 'em back.)

We left with our treasures, happy as a couple of proverbial clams, and continued toward St. Mike's. Mid-journey, I realized that it was already nearly 3pm, and I remembered the museum closed at 4.. and we were pretty dang hungry - ready to eat now rather than later. - So, a second trip to general tanukis, then! Not as fantastic as the first time, sushi-wse, but still a fine place to land for lunch. Grilled Cheese was tasty, but the home made french fries would've been awesome if they weren't quite so limp.

After a satisfying meal - we stretched our legs a bit. I got to visit the bunker, and picked up a couple of stickfas - supervillain and spaceman. (marked at 20% off of $10 each) Armed with toys, I was ready for a little more shopping with BHK... we sniffed around a few boutiques, and at a place called La de da, she got a green hair band with and assortment of rhinestones in it - we though tit was $16, but rang up as $6 at the register... score! We continued through a yarn store with a cute yorkie working there as a greeter, a large pet shop, and then came upon crackerjacks toy store... that's my kind of place. We got a few little wind-up critters - BHK got a tiki drummer (drums are a triceratops and tyrannosaur skulls), a pink hula-robot - and I got walking neon green monkey the plays the cymbals.

Happy in our purchases, we began our journey home... we were going to get together with the in-laws tonight to watch becoming Jane, but they weren't in the mood - so we side-tracked into annapolis to see Be Kind, Rewind. It stopped playing there, so we caught In Bruges. I liked it more than BHK - she scored it slightly below average (a 4/10) while I skewed just the other side (6/10).

The corn is always the best part of movies at the bowtie theater... dialogue with the candy-counter gang was fun... you could see each stereotype pretty clearly. The blonde bubbly girl who likes chick flicks, the lumbering oaf guy that enjoyed hanging out with the girls, and the brounette chick who is the big fan of british stuff, black comedy, more pseudo-sullen than the others.

The pic below was at one of the boutiques... the first meeting place for Maryland Freemasons, now selling frou-frou chic stuff to tourists. 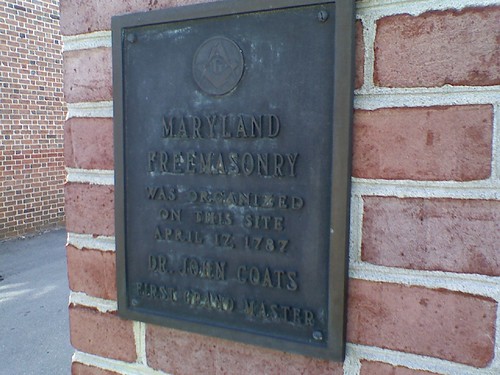 Archaeologists in Greece have discovered the 1800-year-old skull of a young woman who may have undergone primitive brain surgery. An alternate theory says she injured her skull when she suddenly realized she could have had a V-8. Whenever I see the word skull these days, I think Skrull.

4 years ago - strip mall of sin pics, doug made it to Seattle

7 years ago - first hint of the scooby movie, good vs bad stuff about the day, gnomes on snailback