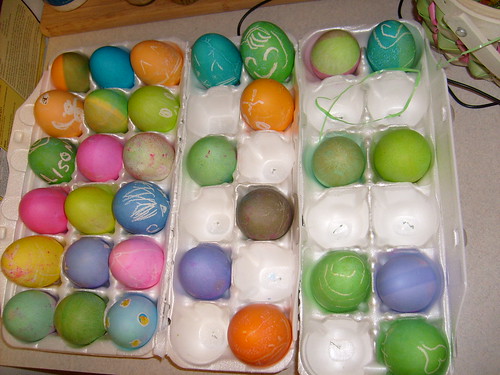 Egg-dying went well... the white spots denote 4 eggs that cracked, and the ones TM took home for herself and MO. Adam took one - he'll be giving it to a girl at school - and he certainly enjoyed the fajitas that BHK made. Larry and Chris (and mostly Adam and Tina, too) spent the bulk of the visit glued to the tube while BHK and I did the majority of coloring. My faves are the family eggs (there's a Scotto, BHK, Pye and Newt in the mix) as well as a couple of oddballs - speckeld ones and hot pink / green... both of which are more vibrant than this photo shows. more in depth pictures later, possibly.


GP's got me interested in Encounter Critical. It's by S. John Ross, an added bonus (I dig the mechanics of Risus, though I've never played it.)

twitterwise, I'm on the Orange Team. icons when in civilian duds, and on team business.

How could I choose another color?


I really want the cell phone legislation banning use of a handset while driving in Maryland to pass. The beltway is rough enough without people crimping necks and not looking at the road. Whatever happened to the idea of pulling over to talk?

I'd love to see some sort of magic technology that blocks non-emergency cell phone use in the driver's side of a car while the wheels are moving.

Same goes for the front-seat DVD players, and audio systems that go louder than a range of safely hearing what's going on outside of the vehicle, as far as I'm concerned. Color me a fascist, but I don't need anyone being more distracted than they already are... If I could find a way to implement a breathalyser / urine tester for safe driving, I'd probably do that, too. And bumper-transponders that forbid tailgating based on the speed of the vehicles in question.

Heck, just use my magical wishing ring to stop all accidents - one of my characters, miniMAX first developed his size-changing abilities by trying to develop desolidity tech for vehicles... they never crash into one another!

After all those years, I still want a hyper-intelligent 4-inch tall talking ape to be my lab partner in fighting crime and solving the world's ills... or clean, safe teleportation technology. Or a magic wishing ring that can put people in protective bubbles, and heal them when they're hurt.

Thoughts about this is coming from the fact that I'm having trouble feeling a lot of sympathy for TM's uncle.... he apparently tried to kill himself by driving his car into oncoming traffic. Seriously... I understand being in pain and lashing out, but there are *PEOPLE* driving and acting as passengers in the other cars! If you want to off yourself, I have no problem with that... but leave everyone else out of it.

I feel bad for TM, though - she's been dealing with his nonsense for a long time, and right before this happened, she blew him off via the phone, and her other family did the same. I don't know all the details, but I hope that once he's out of the hospital he gets worthwhile treatment, and a maximum sentence for attempted suicide / attempted vehicular homicide / assault with a deadly weapon(car). I know his head is full of bad wiring, but I'm finding it very hard to forgive his behavior, no matter how sick he is. I just have to understand that he's not in his right mind, and hope that he is removed from driving and doing anything that can hurt anyone else until he is sufficiently repaired.

38. 'have written 9200 journal entries prior to this one, the vast majority of them posted publicly to the world. Some entries are only a line or two long, others are entire short stories, continued across a few posts, because each entry only holds a maximum of 65,535 bytes. (That's about 16,000 4-letter words.) The journal will be 8 years old in just under two months.

39.'has owned scottobear.com since 1998... that was 10 years ago, March 12. It will need to be renewed again before March 11, 2013. I've got some time to scrape up the money to do so... it's pretty dang cheap. My website's look has changed a few times over the years, as has the content under the hood... it is quite due for a fresh coat of paint, and a revisit to the links contained inside. I started my first website with ol' geocities in 94-ish, back when it was free, and before it was owned by yahoo. that arcane url is lost to me, maybe forever? Who knows if I can dig it up form the web sometime? either way, it was migrated to scottobear.com about 4 years later, and has remained there ever since.


From assorted sources (vchip, mgk, time) - a photo series of rival Kenyan tribes fighting for land with bows and arrows.

Look closely. This is Kenya, specifically a hill overlooking the Olmelil Valley, where Maasai warriors are clashing with members of the Kalenjin tribe on a regular basis. The tribal violence is a depressing comment on a country that only a year ago was promoted as a stable democracy in volatile West Africa. TIME has an interesting photo journal of the battles.

“We were using swords but they were not effective,” says Sylvester, 24, slashing a knife in the air. “In a day we can make between 80 and 100 [arrows],” he adds, refusing to give his last name out of fear. Community members pool money together to buy the necessary tools in secret; the arrows are then distributed within the neighborhood. Local leaders know about the arrow factories, but police forces do not.

"We cannot know the time of day when they (Kalenjins) will come. If they catch you off guard, you're dead," says Samuel, 25, holding a bundle of ready arrows.

Kalenjin elders train their boys how to use bows and arrows from an early age, the Kikuyu men say. But Kikuyus have had to learn quickly to fight back with the same tools. Several secret workshops employing 50 workers churn out bows and arrows for munition. "We have no other choice for now," he says.

7 years ago - walkies, 2 chris-sites, both have long since been left dormant, lj broken