Gentle day yesterday, for the most part. We had a little trouble at the ol' Subway Sammiches joint... the sandwich-maker had a lot of communication issues. Both BHK and I couldn't get across to him or his partner what was wrong with what they made for her. I ended up getting my sandwich, but BHK went home with nothing... made a turkey sandwich here, instead. I think she came out ahead, but so much for her not having to put something together for dinner.


13 reasons why you should not be a freelance writer .

My weaknesses are certainly in the marketing department - but the big one for me is the need for security. I really don't want a gig that doesn't give me a regular check as my main (or only!) source of income.


In the "News I didn't get on time category: William F Buckley died ?

Also, how come I didn't hear about the Hillary fib on St. Patty's until today?

Clinton's tale of landing at Tuzla airport "under sniper fire" and then running for cover is simply not credible. Photographs and video of the arrival ceremony, combined with contemporaneous news reports, tell a very different story. Four Pinocchios. [edit/update - she admits that she "misspoke".]

I found an interesting list of flip flops from both democratic candidates, too - (and, not to be unfair - McCain's flip flops are whoppers, too.)

Thanks for nobody to vote for, team Democracy!


Note to Self - remember some gym clothes for midday work out.

40.'have portrayed Santa Claus many times in my life, not just when overweight, either. It started in 7th grade, Mrs. Glenning's Class - a organization for mothers of twins asked me if I could do the job - in 7th grade, I was already about 5'9 or 5'10. Later, I did it for the children's reading group at the library and bookstore where I worked... finally, I have been Santa for the 'borgs twice. So.. that's 5 times I've helped Kris Kringle out by being a body double. Kids tend to dig it, and I tihnk I do a pretty good job. I can let out with the HO, HO, HO's, and most kids think it's cool that santa is head and shoulders taller than their mom and dad... I didn't realize that was an issue until one little boy pointed out that I was taller than his mom, voice full of awe.

41.' have tried to be slow, in the Hoss Cartwright manner of slow... 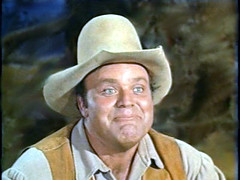 Slow to raise a hand in anger;
Slow to judge a man.
Slow to jump to conclusions.
I have some days that are better than others. I try though, and often succeed. Once I make it to "Succeeds as much as a sane man can" I'll be pretty happy with that.

3 years ago - dr who leaks out, tree, death as a doodle, in the news, tmbg-bloodmobile, missing a brown-eyed girl, squirrel names, pirate vote

If at first you don't succeed...
What have you tried in life that you just weren't very good at?
Reply 224
Chess. I love games, gaming, and just hanging out over a board with pieces on them... I'm quite good at checkers, pente, risk, miniatures wargaming (like car wars, Angriff!, OGRE or see icon of Danny playing Pirates), assorted icehouse and bar games, but...I simply stink at good ol' classic chess.

I'm generally better at tactics than strategy, but I just can't get an opening set of moves that is acceptable at all. I'm not sure why my skill with that particular game is so low - I suspect a mental block or some working of my brain just doesn't visualize the pieces as well.