Happy Cinco de Mayo! see last year's entry for more info on the holiday. I hope we have Mexican food for supper!  [edit - BHK made Fajitas!! delicious, but my gut wasn't happy after a suspect lunch.]

Unrelated to my feelings on Mexican food - After Saturday's little tummy trouble, BHK and I are considering a "best public potties in SOMD" site, unless something like that is already available. For the record - The Giant supermarket in Lusby has potties that are *very* clean and easy to access.

Hm, a quick google search brought up this. (with this being the Maryland section - no Lusby... I tried to add it and the page hung. I'll try again from a non-phone browser when I get home from my commute.)

Picture from said commute - It looks more monday-ish than it feels.

I prefer the doodle further below.

I can't believe I've been playing FPS games for over 20 years. My first multi-player LAN party experience was MIDI Maze at Sun Atari '87, where I gunned Tom Hudson down repeatedly as an orange smiley face. (remembrance due to Wolfenstein 3D being released 16 years ago today.)

First solo FPS on the PC for me was Rise of The Triad - given to me by Kevin, Christmas of '95, after playing the freeware beforehand, and we played Unreal Tournament in '99 as the first regularly played FPS LAN game for about a decade after MIDI Maze.

I still have trouble with the translocator, 9 years later.

Never say "hopeless". My prior back doctor could use a copy of this article. Thankfully, he will be retiring in the next year.

Well, officially back to the goatee - It does feel a lot less warm than the full beard. Last doodle made was on Saturday - I won't have to draw the jawline for a bit, I guess! playing with the idea of colors mixing through transparencies. I forgot to make the white background transparent for the doodle, though. 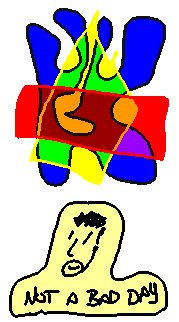