Storm knocked a huge limb out of one of our trees - it bounced on the high power lines and then landed on the Element's hood with a resounding thump. Dented the hood and front end in a few places and spider-webbed the windshield with cracks. I'm just glad nobody was hurt - Larry was fairly nearby. I'll be interested to see how fast insurance turnaround will be on this. Homeowners should cover it with a minimal deductible.

I'm sort of disappointed that we didn't get to hit artomatic - the last two weekends got nailed with Father's day and general germy-ness. Hopefully it did well enough for Cyn to go back next year. It sounded like a hoot!

I want to ride the trolley, before it stops running, too. (I figure it'll be in commission for at least 18 months more, before it stops working out for the city... but it looks like a good cheap way for BHK and I to tool around town for $0.25 a ride. With gas prices, you can't get much better than that.

I mentioned this briefly on Saturday - the bakelite tiles in Hive are chunky (maybe 1/2 inch thick, and about 1 and 1/2 inch diameter) - much larger than I'd thought they would be. It's even mose satisfying to play now, as a result. I've gotten so used to tiny counters and maybe things of "checker" size, that the bigger pieces are a real treat. Still waiting on Mosquito's arrival - not a huge deal, as BHK and I haven't really gotten bored of the basic rules at all.

BHK and I played two games last night - If Wishes Were Fishes and Labyrinth. (I won both.) I suspect the dynaminc of Wishes will change if / when we introduce third, fourth and fifth players. 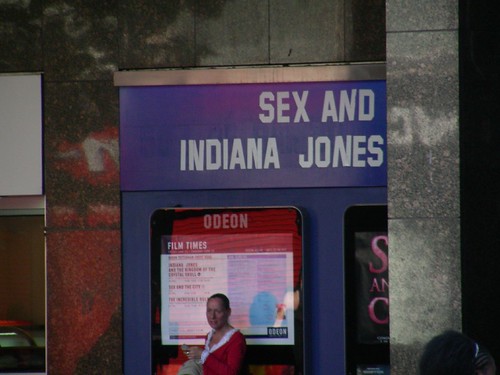 SF Signal has a run-down of the top 10 giant movie monsters, which is inexplicably not safe for work - Also courtesy of SF Signal, check out these anatomical cross-sections of Gamera and Godzilla.

4 years ago - audio blog test, bluetooth virus, Sue Dibney Croaks, Dreams of the old gang, Bloomsday, When the zombies take over, how long until the electricity fails?

5 years ago - paranoid dream (has since come true at least once), silly RP in There, sleepy newt pic, Abbie the Cat Blog

6 years ago - Navajo Talkers, Barbie collectors, I learn about this apartment, palm doodles