Watched the quiz boy episode of Venture brothers last night... mostly character filler and "spot the reference". This season hasn't been as good as last, so far - I hope it catches speed soon. Speaking of TV - I haven't viewed middleman yet, but I keep hearing good things. It should be on our tivo - need to check and see if it was snagged.

I've been at my gig for a year today - hard to believe. In some ways it seems like I've been there a lot longer... in others, only a few months.

Looks like DV has moved on from my old gig as head of MIS at ACIM ... and Tiff is gone, too. They just can't hang on to folks there. I noticed that Obama earmarked $300k from his state to support the ACIM service - I wonder how much of that actually went to help Illinois?

Nice light dinner of sammiches over some silly reality TV. BHK was disappointed when the guy on Farmer takes a wife snuffed out the one she (and I) thought would take it. I still think the whole thing is more scripted than ugly betty, but I'm a reality show cynic.

Why you should never agree to be interviewed by the police - per a law professor and a policeman. (5th amendment - youtube) 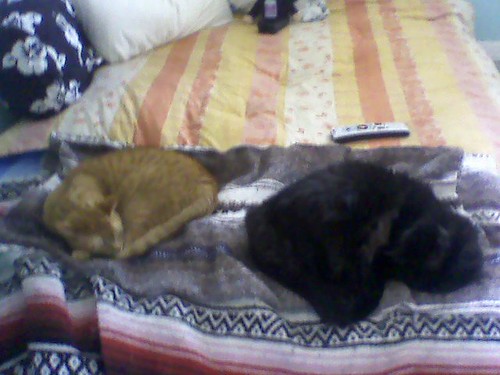 a year ago, they'd never have slept this close together.

Experts unveil ‘cloak of silence’
Being woken in the dead of night by noisy neighbors blasting out music could soon be a thing of the past. Scientists have shown off the blueprint for an “acoustic cloak”, which could make objects impervious to sound waves.

6 years ago - tiling my old place, chocolate doughnuts, happy pill, instinct of awareness, how to make a smoke bomb