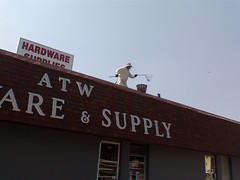 First thing we did today was view Swarm of the Snakehead at 1 am, when BHK woke from her Pizza Hut induced torpor "nap".

We weren't disappointed. Swarm of the Snakehead was exactly what we were looking for (and didn't get) when we went to see Grindhouse. A fun, cheesy, "bad in a good way" sort of horror flick. It's most certainly more a comedy film than horror, despite the periodic moments of gore. I'd love to see this on a large screen somewhere, or better yet as a movie shown outside, on the beach... maybe projected on the side of a large white building.

Head and shoulders above any other made for Sci-fi channel stuff, ten pound would likely do quite well to shop the film to them, or a similar venue.

I may be a bit biased, because it was filmed right nearby, primarily in Easton and Oxford - a hoot picking out local spots.

I can't believe that Gunnar Hansen was both Leatherface and the "Quint from Jaws"-style Fisherman! There's range for you!

I think I'll write up a much longer and nicer review of the movie soon - I want to get some input from BHK about her perspective on the film, too. I'd say it was the highlight of our weekend, though.

After the delightful midnight movie with BHK, we tucked back into bed, and snoozed... I'd say we got up and out of the house by 11ish.

Polished off the last of the croissants from the farmer's market (I had chocolate, she had almond), BHK decided to venture forth to Aardvark and grab our waiting games. Mike and Tara were out, but the employees were swell to us.

The day was gorgeous and since we wer euntethered by any other family responsibilities (in-laws took tigger to Salem for a long weekend), we meandered around Southern Maryland, looking for a nice new spot to grab some lunch and just enjoy each other's company.

After much tooling around of St. Mary's, we eventually ended up at the Reluctant Navigator. After eating there, I understand his reluctance. The food was somewhere between meh and ok. Service, not bad - environment when we first walked in the door was "we've made a terrible mistake" but after getting past the foyer filled with old boat motors, chainsaws, and crab traps covered in dust, the clean dining area changed our tune to "oh, this is probably all right." I'd put the food at medium-low quality. somewhere in the 3-5 out of 10 range. I seriously doubt that we'll be back, unless something amazing causes us to return.

We continued on our journey, with food in our bellies - after putting some petrol in the tank, we wandered into Cecil's Old Mill, a general store and post office - pictures to follow sometime after I upload 'em. Meanwhile, check out what somd online has to offer. When I saw the logs in place, I had two thoughts. first - that's perfect for an old movie villian to strap a maiden to, and let the hero try to save her while he gets away. The second was the gravity gun usage in last night's HL2.

The old post office was my favorite, though. Lots of memorabilia everywhere.

We bought a pair of homemade brownies and a diet pepsi, and toddled on home, to water our plants right before a huge, thunder-filled rainstorm.

We had tasty sammiches for dinner, and watched our last tivo'ed Monk - where he reunites with his pop. Not a bad character dev show, but a lousy mystery solution. "We found the tie!"

Just so you know that your family isn't so bad, dear journal -

A seven-year-old boy was kept chained in a closet as relatives hacked off pieces of his flesh to eat, a court has heard.

In a case with echoes of the Fritzl family horror in Austria, Ondrej Mauerova was partially skinned in the closet in a cellar at his home in Kurim near Brno, in the Czech Republic, according to reports.

The abuse – involving members of a religious cult – was uncovered by chance last May when a neighbour's television baby monitor picked up graphic pictures of what was happening next door.

Ondrej and his nine-year-old brother Jakub were locked and chained in the cellar for months by their mother Klara, 31 – a member of a group called the Grail Movement.

He was caged, beaten and gagged to stop him screaming, according to reports.

Mauerova had the monitor installed so that she could watch the abuse from her kitchen but the images were picked up by a neighbour who used an identical system to monitor a newborn baby, the regional court in Brno has heard.


Police were called and the two boys as well as what appeared to be a 13-year-old girl were freed.


But the girl later turned out to have been one of the alleged abusers, 34-year-old Barbora Skrlova.

She subsequently fled to Norway before being brought back to the Czech Republic earlier this year.

Mauerova has admitted abusing her children but she said she had been manipulated by Skrlova and her own sister Katerina.


The accused are Klara Mauerova, her sister Katerina, 34; Barbora Skrlova, 33; her brother Jan Skrla and a friend Jan Turek.