Good solid day of work today - getting a lot done and covered. Met the new VP, and he seems like a really nice guy who knows his stuff. I wish I could advise him more on commuting, but he's a car guy, and not a train or bus sort.

After work, BHK and I went out to lemongrass for a little date - the food was excellent and the company wonderful. It was raining like gangbusters outside, so we stayed for dessert... the Thai doughnuts and fried ice cream were also great, but I tihnk I ate way too much. After the weather let up a bit, we went to petsmart to look at the critters, and saw an army gal with a haircut that made her look a bit like donald duck.

Went home, watched the pilot of middleman. I liked it - it was a little sticky, but forgivable in a pilot episode... There was a super-intelligent gorilla in a tracksuit, which was pretty cool, but I'd prefer that they not mention comics so much. I didn't need a Grodd reference. He was more like the Mod Gorilla boss to me, anyhow. The "filthy paws / damn dirty ape" quote was expected, but really, that's forgivable. I'll be watching it again, and expect it'll gain some momentum if all goes well.


In honor of Swarm of the Snakehead, I made my own proto - snakehead beastie (you can download him at the link) in Spore yesterday. BHK's bitey monopod will be uploaded soon, too. 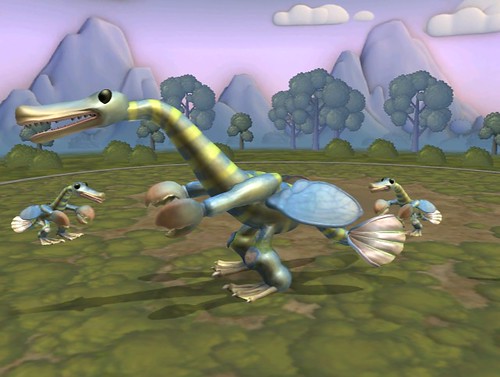 George Carlin passed away. I think that his routines in recent years got a little... I don't know... Lame? Turned more from radical or wacky to just whiney "get off my lawn you kids" humor? I feel the same way about him the way I feel about a lot of folks I liked more when I was younger - maybe I outgrew him, like I did Harlan Ellison's angry young guy shtick as it turned into an angry old guy bit. As I age, it gets harder to be entertained by that sort of thing. Maybe they both just ran out of whatever mojo kept them fresh and interesting to me. I still like the old stuff. Not as angry, not as bitter... things can have bite and not seem just sad. He was a great satirist during the bulk of his life, and I'm sure he will be missed.

I saw him in "concert", at FAU, ages ago with Jeremy Dawsey. I don't remember where James was, or why he wasn't along. We had a *fantastic* time, and it was likely the only time I've seen a comedian in the last 20 years that wasn't "schticky"... fat guy telling fat jokes, lesbian telling lesbian jokes, black guy doing black jokes, prop comics... etc, etc, etc.

I'll just choose to remember this:

LOS ANGELES — Hollywood will enshrine an eclectic bunch in its famous curbside Walk of Fame next year, including Hugh Jackman, Ben Kingsley, The Village People and fictional Tinker Bell.

Cheeta isn't on the list. The animal actor, whose credits include the 1967 comedy "Doctor Dolittle" and the "Tarzan" movies, was trying for the seventh time to get a sidewalk star.

His handlers had launched an online petition to get supporters to urge the Hollywood Chamber of Commerce to give him a star in 2009.

The Hollywood Chamber of Commerce's Walk of Fame Committee chose the recipients, who were ratified by the board of directors Thursday.

Seriously? Tinkerbell got a star, instead of Cheeta? She didn't speak, and has only starred in one film! Cheeta's an actual being, not just a drawing. What's next? The NBC Peacock?

3 years ago - too much goin' on, pyramids, bq weds, yawnies

5 years ago - GP writes me after however many years, reader influx, bro behaving,insensitive online transgender Columbina gets snotty with D, lovey-newt.

6 years ago - a very well thought-out email about getting a journal code for japaneseblossom, 100 questions, Newt-acrobatics, beanbag sofas, rate kittens.

8 years ago - Nothing.. not updating regularly yet