Cathy's Yard Sale Preview went well. We got 3 bookshelves, confirmed out swap of the china cabinet for the huge red sectional, and got a few additional bits of loot - rechargable candle lights, a pizza stone for the oven, a cooler bag.

Farmers Market Dinner was awesome - I had a veggie-meatloaf sammich with cheese, garden veggies and bread & butter pickles. a meal fit for a king. dessert was pound cake with vanilla ice cream and fresh raspberries. All while Watching O Brother Where Art Thou? 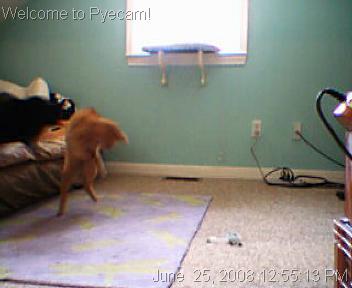 This site lets you track the International Space Station, the Space Shuttle (when in orbit), and all sorts of other satellites in relation to their position over the earth with a familiar Google Maps interface. Very cool.


"...even if tomorrow we opened up every square mile of the outer Continental Shelf to offshore rigs, even if we drilled the entire state of Alaska and pulled new refineries out of thin air, the impact on gas prices would be minimal and delayed at best. A 2004 study by the government's Energy Information Administration (EIA) found that drilling in ANWR would trim the price of gas by 3.5 cents a gallon by 2027."

8 years ago - Pre-breakup confrontation with April