Where your memories began.
What is your earliest memory of your life?
Reply 253
Going to the Franklin Park Zoo - well before the children's zoo was completed (http://en.wikipedia.org/wiki/Franklin_Park_Zoo ) with Michelle, my mom, and Vera. I think - This might've been before my brother or Kevin was born - That'd put me at maybe 3 years old (so, 1971-ish), or thereabouts. I was walking, Michelle was in a stroller. Even then I liked the monkeys. I can remember a lot of spotty things - I had a red, yellow and blue striped shirt that reminded me a bit of Ernie's. (see also - http://en.wikipedia.org/wiki/Bert_and_Ernie ) Had a vanilla soft-derve cone that dripped all over the ground.. more probably melted than I ate, but my hands were sticky enough that I had to wash 'em in the water fountain (folks in Massachusetts call 'em bubblers.) (again, see also - http://en.wikipedia.org/wiki/Bubbler )

Michelle was very well behaved, but was afraid of the bigger critters, like the giraffes. Both Vera and my mom smoked cigarettes - Virginia Slims, I think. I didn't like smoking even then - ash flew everywhere, sitting in the back seat while folks smoked up front was no fun, and the smoke stunk even to my 3-year-old sensibilities.

Sad to think that both Vera and Michelle are gone now - Michelle passed away years ago, and her mom left this world in the last month.

Back to work - but it's a short week this go 'round.

Newtcam and Pyecam may be a bit messy for the next couple of days as the house gets put back in order. Or maybe not... the images are a bit outside the primary shuffle-zones.

Hits on the side links for both have been down lately - I wonder why? They've been mighty cute recently and viewings is still pretty high, but nobody wants to go through the ads. I can understand that. I'm just surprised that there aren't more things interesting to folks on the sidebar. I should probably add more text at the bottom to mix the feed up a bit.

In-laws came over for pizza and the 2nd half of astronaut farmer - movie didn't do much for me, but I didn't totally hate it either. BHK was about the same, I think.

100 years ago today, a swamp exploded with about three times the power of all explosives used in the second world war - combined.


I keep thinking of Winston Churchill's quotation, made in a radio broadcast in October 1939:

"I cannot forecast to you the action of Russia. It is a riddle, wrapped in a mystery, inside an enigma; but perhaps there is a key. That key is Russian national interest."

Just the "a riddle, wrapped in a mystery, inside an enigma" part. 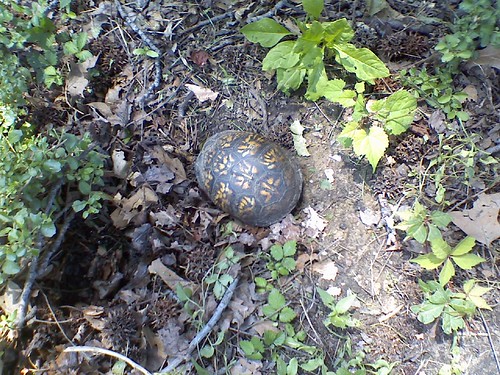 Nutmeg J Salmonella - the little box turtle that lives in our back yard, near the vegetable garden. Nutmeg - named for a turtle I had as a Kid in Delray Beach (named nutmeg, because that was the name on the pen we had for him to live in - prior resident was a brown rabbit of the same name.) Salmonella - well, because he's a turtle nothing personal, I assure you, dear journal. I love his shell-patterns.. remind me of raccoon footprints. J, because it's standard procedure to give J as the middle initial, isn't it?

We also have a multitude of tadpoles living right next to our bedside window - there's a drainage ditch filled with water that gets just the right amount of sun. I hope all the little froggies are viable, and take care of the mosquitoes that have been appearing since summer hit. They can leave the lightning bugs alone if possible, too.

2 years ago - goodbye june, i live for you, teddy bear gun