We still haven't dug into Canasta Caliente or Rook yet. I suspect next weekend will be good for that. Maybe Chinese Checkers, depending, too. (Perhaps just 2-player Halma.)


BHK made dinner tonight of veggie brats with onion and green pepper (on a baguette from the farmer's market) , along with sides of Mexican-style corn on the cob. Good stuff! 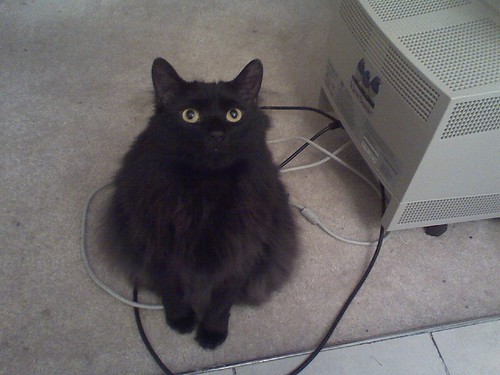 Pye on "Monitor Duty" this morning. He looks like he just woke up, but he's been flipping around for at least an hour.

I can't believe my Dad would've been 62 this year. I can't even imagine how he might've aged.


Just checked on my Brother's record online, and it says he's in 12MM (Male Infirmary). I wonder what happened to him? He's now in the North Broward Bureau, which is already a bad sign.

The primary mission of the facility is to house and manage the mentally ill, medically infirm and special needs inmate population.

Momster pulled his police report - It seems he'd parked in a handicapped space, and when the police ran his tags, the car he was in was reported stolen. Apparently his license was expired, as well. It was certainly enough to violate probation.

[Edit - in 11c now, out of the infirmary. Bro has been there before. My guess is he is detoxing or being treated for bi-polar as he has claimed that in the past.]

jamacianjungle dreamed that she got to play with him!), palm entry, grim reaper song

8 years ago - no ihop, replan for movies, april trying to soften me up, jenjen peeking