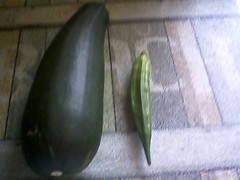 Okra has come in with the first zucchini - vile, slimy okra. We'll see if BHK can win me over to this veggie, like she did with Zucchini.

John R Cambron (who lives in North Beach!) has an excellent track map showing the layout of all switches, yards and platforms in the Metrorail system. Now, he's expanded that map based on the Metro 2030 vision to create a potential 2030 track layout. - via


In the first case to review the government’s secret evidence for holding a detainee at Guantánamo Bay, Cuba, a federal appeals court found that accusations against a Muslim from western China held for more than six years were based on bare and unverifiable claims. The unclassified parts of the decision were released on Monday.

With some derision for the Bush administration’s arguments, a three-judge panel said the government contended that its accusations against the detainee should be accepted as true because they had been repeated in at least three secret documents.

The court compared that to the absurd declaration of a character in the Lewis Carroll poem “The Hunting of the Snark”: “I have said it thrice: What I tell you three times is true.”

more here at the NY times

So, how many human rights advocates are going to boycott all of the sponsors of the 2008 Summer olympics in Beijing ?

Numerous human rights violations have taken place in China because of the Olympics, according to an Amnesty International report. In 2006, Beijing implemented a detention without trial scheme called "Re-education Through Labor" which targets people who have committed minor offenses and are forced to work long hours and can be detained for 4 years. Concerns over the games also include the potential for boycotts from pro-Tibetan organizations such as Students for a Free Tibet as well as from organizations such as Amnesty International upset with China's involvement in the crisis in Darfur.

Biggest tricks for me to avoid would be be -

Johnson and Johnson - very big company - not sure if we could dodge every tendril. I can rattle off at least 5 of those items in our home right now.

Coca-cola - everywhere, but avoidable if you take note of what you're drinking, including water.

Visa - well, that's my bank's debit card, and almost every place on the planet takes it... so, unless I want to live and trade with cash-only businesses, that's a deal breaker. Too big to defeat.

Items of little to no difficulty -

McDonalds - not hard for me to miss out on - we only ever go for shamrock shakes or pumpkin at halloween. Easily avoided.

Samsung / Panasonic - easy peasy. I get 99% of my electronics from other sources, though our tv is a samsung right now.

VW? Awww... you guys let me down. Would I have to boycott playing punch-buggy?

Adidas - no problem missing out on them.

UPS - I do use them on occasion, but there are alternatives.

Snickers, Tsingtao, and Budwiser - I can do without all of those.

Kodak - plenty of other options there, too, but they're in a lot of places. depending on the extremism, some might want to forego any book that used kodak photography or processes. Movies, etc.They are teamed with Motorola and Lexar, for that matter.

Who can say? I won't be that extreme, but sometimes I feel that I should.

‘Zero’ chance lottery tickets stun some players - Through a request filed under the Freedom of Information Act, Fishwick’s firm was able to obtain records that showed the Virginia State Lottery sold $85 million in tickets for which no top prize was available.
1 year ago - hot brain, hot pixel, night of the comet, the frighteners, Louise and in-laws at supper, dinner pix, shag and klondike bar