This week seemed to go more swiftly than imagined, and today was pretty dang full of stuff.

Shots, then swung by Trott's farmers market for corn, zucchini (we need zucchini?!?) and eggplant (we need eggplant?!?)

BHK is veggie-crazed, and wants more of the tasty stuff than our victory garden is producing. Mystery veggie is pumpkins after all - we'll have some gourds to carve for Halloween! (they sprung from the seeds of the rotting pumpkins we tossed into the garden area last November.)

We picked up the in-laws, and hit the Selby Sub Shoppe - white pizza for Chris, Hamburger for Larry, Chicken Parm for BHK, and a black bean for me. They make their own bread, and it was all really tasty!

Came home, cooled our heels a bit and then went to go see the US Navy band play a free concert on the boardwalk by the bay. The bluegrass band went into more mainstream country and southern rock - they were quite skilled, though still had a little newbie edges on 'em. The singer was 2 days into the band, and his voice was excellent. I wonder what the difference between "Musician, 1st Class" and "Chief Musician" is in rank and pay grade for the Navy? The Banjo guy was my fave of the lot.

Mother in law, reading the local news while we were at the free concert on the bay. 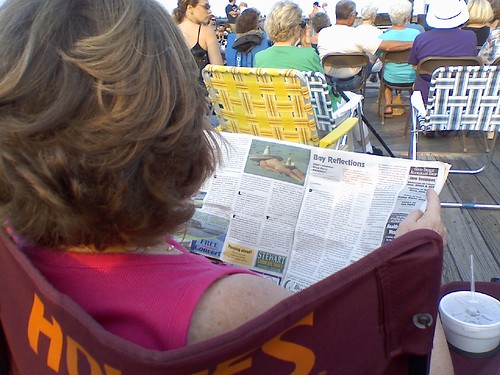 Note the vital sombrero placement in the picture.

We all came home, and had ice cream while watching Dead Men Don't Wear Plaid. (I hadn't seen it since the theater.)

The folks left, and now BHK is asleep, leaning on me while I watch and old Episode of Star Trek - The Cloud Minders - I don't even remember this one, and it seems for good reason... the writing and acting were of a lower par than usual.


MIT scientists just figured out how to make solar energy forty times more efficient in a manner that allows one to upgrade old solar cells too!


Ray Gun Puts Voices Inside Your Head - The Sierra Nevada Corporation claimed this week that it is ready to begin production on the MEDUSA, a damned scary ray gun that uses the ‘microwave audio effect’ to implant sounds and perhaps even specific messages inside people’s heads.


1 year ago - factoids about folks I know, armed car chase through the neighborhood, Perseid shower reminder, brits start to ditch wigs in court