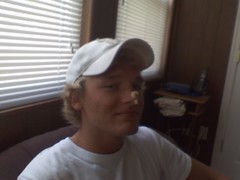 BHK managed to grease Adam's nose, with a minimum of struggle. total surprise. We watched The Seeker: The Dark is Rising -(not bad, but seemed more than a little "Mary Sue"-ish, even for a fantasy movie. Christopher Eccleston was totally misused in the film. I know he can act, I've seen it.) and re-watched National Treasure 2. (BHK and Adam really like the sequel... while I like the first, the second fell a bit flat for me.... I am looking forward to the next one.)

Chips and dip, Hot dogs and corn on the cob for all, with a confetti-birthday cake, yellow cake with whipped white icing and sprinkles. It was devoured before a photograph could be recorded. I fear we may soon grow weary of hot dogs, but I'm doing OK so far. In-laws left at about 6, and Adam at 7. We hit the sack pretty early again tonight.. need to recharge the batteries for tomorrow.

We gave Adam coupons for his birthday, as we couldn't find anything his size that was something special.


Guy to girl in Springfield Mall: