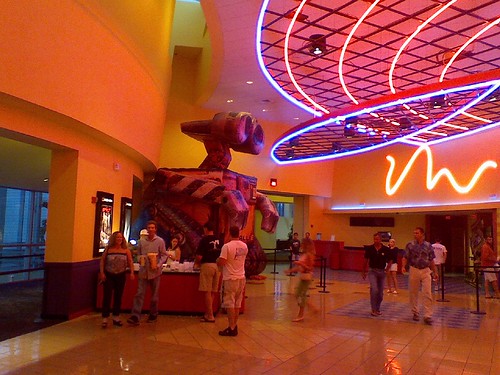 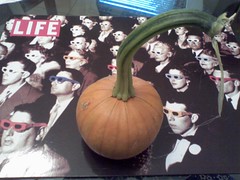 Taking my pumpkin to a 3-d movie. (BHK's nickname is pumpkin, amongst others. Sorry, GP.)

Journey to the Center of the Earth We're hustling to see it... we're fearful it's going to leave the theater before we can catch it...We loves us some 3-d movies. Review later.. we won't be disappointed.. it can be Dr. Tongue's 3-d house of pancakes... if it's in 3-d, we're all for it.

Speaking of which - The Society of Motion Picture and Television Engineers, the folks behind such innovations as the color bar test pattern, want to codify a standard for watching 3-D content in home theaters. They're casting the net wide to include all possible sources and displays, from over-the-air broadcast to DVDs and Blu-ray. Ars points out that Hollywood is both excited to sell you their movies again, this time in glorious 3-D, and worried about potential lost revenues at 3-D theater screenings of, say, George Lucas's 3-D Star Wars remake. via Ars Technica

[edit] Back from the movie, and we had a lovely time. The kids in the audience enjoyed it, the giggles and screams and the "pop-up" parts added to the overall appeal. It was a lot of fun, and I wouldn't call it a stinker at all, contrary to popular opinion. BHK feels that it's her fave movie of the year, thus far. I don't know if I'd go that far, but I liked it, too. Fave bits fpr me included pseudo-snakehead fish and aquatic dinosaurs, and lots of gratuitious "look! 3-d, in your face" bits.

Now, it's off to Red Robin for supper, and then toddle on home!


A factoid I just came across: If not for the Beatles, we wouldn’t have CT scans, aka CAT scans, the advanced medical scanning technology.