Newton sunning upstairs on Pyecam - he loves going up there from about the time I leave the house to midday, when the sun has passed, and the heat-beam has shifted. 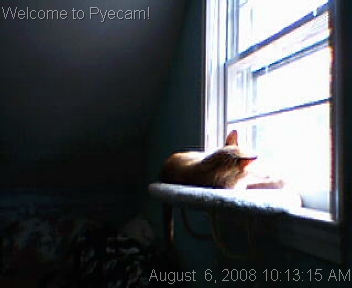 More images from this morning's Newtcam - BHK moved it closer to the ledge. clicks embiggen.


Tooth is definitely damaged - filling and tooth itself have pulled apart, and the tooth portion is loose. we'll see what happens tomorrow. Pain is ok - still only at medium headache level.


BHK and I have really gotten into following the blogs of a few WUSA9's folks - Kim Martucci and Angie Goff, specifically. They're trapped in a horrible blogging software called pluck, but once past that, it's really fun to see folks that are brand new at the whole on-line journal thing... and puts a more interactive and social face on folks you normally only get to see in a one-way medium of TV. I've mentioned both Kim and Angie before once or twice, and they both seem to be swell people.

ok, last timeline for the upgrade until they get here, or unless they're late.


Retronomatopeya … Flickr set of sound and movement effects from comics

3 years ago - Mona moves on from work, Lisa is a good name on lj, NASA pics, walkies phone post

8 years ago - many folks join my Friendy-list (probably due to addition of interests) , grover, graves museum