Went the dentist - got a temp filling and I need a crown. Later at dinner, the temp filling fell out, but it's aok for now.

Went to the Walgreens and I got BHK a pedegg - foot callous remover and orange zester, apparently. I think it's a pretty surreal device, and is more surreal to me en espanol.

Watched latest Psych and Dragon's Den... that's about it!


Hey, Thanks, Knife-wielding robot! You're not as dangerous as you sound, I guess! 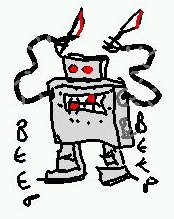 crazy robot doodle by me, article via

I just realized something about German boardgames. Seldom do you see dice. Cards are drawn and are sometimes used as randomizers, but you can still play the odds a bit - it's rare to roll the ol' bones. I wonder why?


Bengie's is showing Wall-E, Dark knight and step brothers... I don't think that I care to see Dark knight again, so it looks like we'll wait another week or so before our return trip to the drive-in.


Follow up on the mayor's "drug raid / dog shooting" indecent. He's completely innocent, it seems. Prince George's County Police really fouled up, in my opinion. That and the armed car chase through my neighborhood (well outside PG county jurisdiction) only adds to my problem with that organization. Some sort of Internal Affairs review needs to be done... but it seems unlikely.


"The mayor's counsel also disputes authorities claims that they killed the dogs, Chase and Payton, because one of the dogs was coming at officers. Maloney says one dog was running away and the other was shot some distance from the front door.

Still, county law enforcement officials say they do not owe the Calvo's an apology. Chief High defended the officers actions, but expressed regret over the death of the dogs."


As someone that's been at swat team gunpoint more than once... (06/02/2001 when my landlord went loopy with his guns over his face cancer and 02/24/2004 once when my bro committed "grand theft boat".) - I can honestly say that sometimes the police has good reason to hold someone under potential deadly force. I'm thankful that neither I nor Newton were shot

Well, bro is right on the border of the 44 violation points rule. (he has exactly 44 points)(pdf info ) If convicted of all of his charges, he could either do under a year in county jail, or over a year in state prison.


If total points are equal to or less than 44, the lowest permissible sentence is a non-state prison sanction (however state prison up to the statutory maximum can be imposed).

If total points exceed 44, the minimum sentence is established by taking the total point value subtracting 28 and decreasing the remaining value by 25%. This end result value is the lowest permissible prison sentence in months.

The magic number is 44: Anyone scoring above 44 points "must" be sentenced to state prison under the Code. However, the plea bargaining process can a) reduce the number of counts charged, b) have an agreement not to score certain items, c) substitute charges, d) reduce the actual count charged, or e) several other creative techniques can be used to get someone sentenced to a non-incarcerative sentence. Note the departure grounds under Rule 3.992(b), but also note the actual language of the "Sentence Computation" because someone charged with a felony can be sentenced to state prison even if the score fewer than 44 points. For this reason, felony cases are always very serious legal matters.

For his Faces of Evil project, Hans Weishäupl made composite photographs of the world's worst dictators by photographing hundreds of people in each dictator's country and stitching them together. The results are a bit disturbing, particularly when viewing very large, clear, vibrant color photos of long-dead monsters like Stalin or Hitler. (via conscientious)

7 years ago - harried, inculpate, plane lands just down the road on andrews as a makeshift runway and kits my regular bus, wondering about lj's image server (still not ready!), happy thoughts, magic can of soda