Another *busybusy* day at work, but eased when I got home - BHK made supper of the remainder of the sloppy joe mix became taco salad fodder, with a side of veggie taquitos. Good stuff... BHK and I watched the Vampire Ventriloquist's Dummy episode of Middleman - the show continues to shine. Venture brother's first half was pretty spiffy, too.

Other things that brought cheer - seeing these kitty pictures in the archive... both were taken at the same time - both kitties sucking up as much sunlight as they could hold. Newt was totally whited out, and pye looks very comfy on the purple couch. 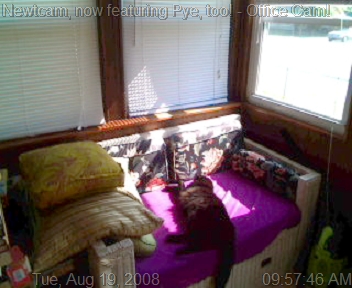 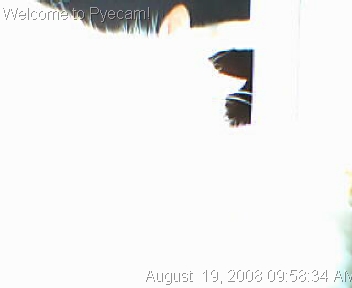 Metro's official stance on begging on the trains and buses -

-Panhandling and soliciting of any kind are prohibited on Metro.
-Donate your money where it can do the most good by supporting local social service programs.


The nice folks at NPR have done us all a favor and taken some used Kinoki foot pads to be tested to see if they'd drawn anything out of a guinea pig reporter's body. Guess what? They didn't.

Reporter Sarah Varney bought some Kinoki foot pads and wore them to bed. She also subjected her husband to the (alleged) detox treatment. In the morning, they both awoke to the stinky brown mess that the advertisement had promised. Not convinced that the brown stuff had actually come from their bodies, our hero took the foot pads to a lab and had them analyzed and compared with unused pads.

"Compared to the blank that's almost identical," said the scientists. "It looks like three of the same sample, basically."

A doctor from UC Berkeley confirms the scam diagnoses. Your body already eliminates "metabolic waste" and "toxins" through, um, other means...

"For many hundreds of thousands of years we've been successfully eliminating them through the usual means, which is urine and feces, and there has been no demonstrated need to accelerate that."

So what is all that gunk in the pad? We're not really sure, but it shows up if you hold the pad over a pot of boiling water. Who knew distilled water had "metabolic waste"?

3 years ago - bro out, pay links, looking back meme, friday 5, monkeys in gov't

7 years ago - I photoshop my dream, coloringbook, fecund

8 years ago - time of darkness