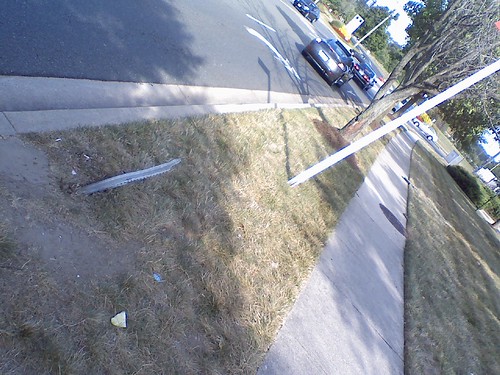 I was leaning against this signpost this time yesterday, reading my book. Today it is knocked over and torn in two. I suppose now that it wasn't a very safe place to stand and wait for the bus.

Wednesday Night - Veggie Protein-spheres (rather than meatballs) in sauce, homemade pickles, naan bread - made for a tasty sammich with sweet potato fries on the side. BHK and I were pretty dang sleepy, so we sort of crashed on the couch after supper. I got back up, but BHK was down for the count. I wrote a bit here, and now we're off to the sack. Until later, dear journal!

Roger Ebert is not a fan of 3-D movies.

Ask yourself this question: Have you ever watched a 2-D movie and wished it were in 3-D? Remember that boulder rolling behind Indiana Jones in "Raiders of the Lost Ark?" Better in 3-D? No, it would have been worse. Would have been a tragedy. The 3-D process is like a zombie, a vampire, or a 17-year cicada: seemingly dead, but crawling out alive after a lapse of years. We need a wooden stake.

Oh... BHK is going to disagree there!

Day of Choice -Weekend days are best - Saturday. Or should I go all clever and say payday or birthday?

Essential Item - PDA - it's full of books and my doodlepad!

Hometown - Boston, MA... or Fort Lauderdale, FL depending on time spent there

January or July - January... but If I had to pick any month, I'd go with October.

Kids - are cute and fun, mostly... and are also a lot of work and a huge responsibility, too.

Life isn’t complete without - Love. (My first thought was Death. Sad but true.)

Number of Brothers and Sisters - One Brother, no sisters.

Oranges or Apples - Oranges in juice, apples in pies. If forced, I'd have to pick oranges, just because I find the rind fascinating and fragrant.

Phobias - Not really phobia, but I'm extra redoubled careful about the kitties getting loose.

Quotes - It's a long one from Bill Hicks -

The world is like a ride in an amusement park. And when you choose to go on it, you think it's real because that's how powerful our minds are. And the ride goes up and down and round and round. It has thrills and chills and it's very brightly colored and it's very loud and it's fun, for a while. Some people have been on the ride for a long time and they begin to question, is this real, or is this just a ride? And other people have remembered, and they come back to us, they say, "hey - don't worry, don't be afraid, ever, because, this is just a ride..."

And we... kill those people.

"We have a lot invested in this ride. Shut him up. Look at my furrows of worry. Look at my big bank account and my family. This just has to be real."

Just a ride. But we always kill those good guys who try and tell us that, you ever notice that? And let the demons run amok. But it doesn't matter because: It's just a ride. And we can change it anytime we want. It's only a choice. No effort, no work, no job, no savings and money. A choice, right now, between fear and love. The eyes of fear want you to put bigger locks on your doors, buy guns, close yourself off. The eyes of love, instead, see all of us as one. Here's what we can do to change the world, right now, to a better ride. Take all that money that we spend on weapons and defences each year and instead spend it feeding and clothing and educating the poor of the world, which it would many times over, not one human being excluded, and we could explore space, together, both inner and outer, forever, in peace.


Reasons to Smile - Lots of 'em... Family, friends, a clever psaage in a book, soap bubbles, winning a video game, smelling baking bread or fesh cut grass, thinknig of something new or in a different way.... too many to list.

Tag Seven Peeps - no can do, buckaroo. Just let me know if you run with it, whoever does take it.

Unknown Fact About Me - Hard, with a decade of journals online... I'd say that most folks don't know that I was a very quiet kid in high school - more stand-back than joining the crowd, save for a very small group of friends.

Vegetable - I do like the broccoli, but corn is mighty.

Worst Habit - I'm a bit of a clutter-bug, and often fail to pick up after myself. I'm trying to be better about it, though.

X-ray or Ultrasound - MRI.. but of those two, Ultrasound.

Your Favorite Food - Variable. I'm craving sushi right now, but I really like Thai / Italian / Mexican dishes across the board. BHK is an awesome [edited to add:[ COOK! COOK, I SAY! CHEF, EVEN!]

Zodiac Sign - Aquarius... or for those of a more eastern bent - Earth Monkey