Hell of a long day at work, but BHK and I started to make her Birthday weekend roll with dinner out at Saigon Palace for dinner. We'd never been there before, so it was a bit of an adventure... Our traveler's luck served us well this time: 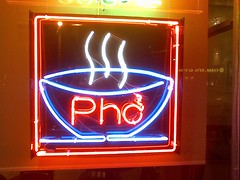 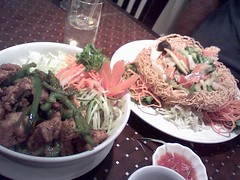 The place was pretty empty for a Friday night... food was delicious and our servers very attentive and friendly. I'll happily go back there again and again - lots of veggie goodies to try, and the Pho will be super come colder months ahead. (I got the bird's nest, bhk got the lemon tofu. I think she won, but mine was mighty tasty, too!)

Hopefully this puts us on a solid roll toward Birthday goodness!


Ray Bradbury is 88! Happy birthday, one time great writer, now crotchety old guy! Dandelion Wine is still my one of my all-time faves. Thanks for that... I wouldn't have a lime-vanilla ice, otherwise.


In an online survey, 42 percent of Internet users admitted to logging into other people's email and social networking accounts without their knowledge. The poll doesn't ask if passwords were found, granted, or stolen — which would make for further interesting results. The write-up summarizing the results defines the respondents as part of an "educated tech-readership" and questions the ethics of logging onto someone else's account, and whether those differ depending on the person and relationship."


1 year ago - local pictures of a local house coming down and Larry on his riding mower, stuffed peppers, Mrs. Pollifax - Spy, Quotes, Tired