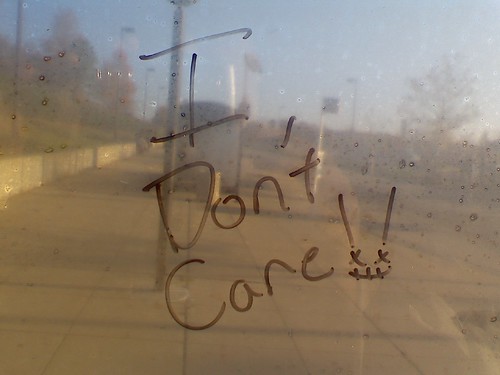 graffiti on the metro system this morning. mixed message to me, given the double exclamation points and grinning skull smiley underneath. i can't tell if it's a male or female writing style, suspect female - maybe the sort who dots the i with a heart or star?

regardless of the picture, i do care.

Reading Aloud
One of the highlights of going to a literary festival is hearing authors read from their own works. What author, living or dead, would you most like to hear read?
Reply 246
Well - keeping it to the mortal realm ("God reading the bible" would surely destroy me - the True Voice being is too pure and too powerful to be heard by sinners, thus, instant death.)

Stepping to mortal flesh, I'd love to see the Sermon on the Mount, even though that wasn't originally delivered (if it was ever actually performed) as Author to Reader. I don't speak or comprehend aramaic, but to just be there at the original would be beyond amazing.

Most of the literary classics were Greek, Latin, French and German. Even Borges nifty stuff is Spanish.

Perhaps it's best to fade to more contemporary and in my native tongue.

I'd likely go for Mark Twain, as long as I could get a beer with him while he pontificated on his choice of writing.

Biblical Side note - The highest of the Archangels (and therefore the highest of the Seraphim), the Metatron acts as the voice of God and occupies the throne next to the Divine Throne of the Almighty.

Derived from the Latin Metator, Metatron can be translated as "guide" or "measurer".

Some claim the Metatron was the prophet that was turned into an angel, taken to heaven, and given 36 pairs of wings. Some believe him to be the angel that led the Hebrews from Egypt. A few theologians call Metatron "Lesser YHWH" which stands for the most sacred and unpronounceable name of God in Hebrew (well, the YHWH part anyway). Metatron is also said to be the tallest of the angels from 13 to 18 feet depending on the source, about 2 to 3 times the height of a normal man. For reference, remember that Goliath is believed to have been about 9 feet tall.

The Metatron was thought to have many names. Yahoel, Yofiel, Surya, and Lad are just a few of his 72 other names. Some believe that he carries the Jews prayers through 900 levels of heaven to God.

It is Metatron's task to sustain mankind (as seen in Kevin Smith's Dogma, he interacts with the humans to prevent their demise). He has been known as the link between the human and the divine. After arriving in heaven he was transformed into a spirit of fire and equipped with 36 pairs of wings. In addition, he has countless eyes with which he sees over all the earth. He resides in the 7th heaven and, when he feels like it, appears as a pillar of fire (as the one in Exodus which handed down the ten commandments to Moses). He is the supreme angel of death. God tells him who is to die, he then tells angels below him to take care of the gruesome task.

Metatron is said to be the highest of all the angels, more so even than Michael or Gabriel. The burning bush, pillars of fire, and any other time a human thought he was talking to God, he was actually talking to Metatron (except those sort who are actually just talking to themselves - who can say?)