We also got a nativity set at the same time we picked up the tree. 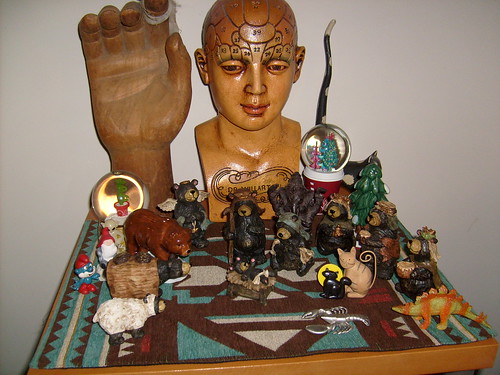 Bears! View full size for maximum effect. We added some other items to the scene - Pye and Newton had to be there, and it spiraled out from there.

We went over to the in-laws for pancake breakfast after sleeping in nicely this morning. I had a bit of an allergy attack, had to head home - did some work-work stuff, folded some laundry and put lights on the tree while BHK did household work and made use quiche with cheese, veggie sausage and green peas... and some veggie sausage-biscuit balls, too. *VERY* tasty and hearty fare. The in-laws came over too, and we just hung out and chitty-chatted - watched some old episodes of Newheart and the Honeymooners on WGN -  The in-laws are out the door now, and BHK is sleeping on my lap... but now it's time for bed.

2 years ago - shopped, ate, got fluxx

7 years ago - pumpernickel, Newt on my long-lost chair, moment of weirdness, wacky news, what we did before toilet paper, coprolite