Friday at last. Got a long weekend ahead of me - but I've got a couple of issues I've got to tend to before I fully relax. Two things for work to get in alignment - Wednesday will have to go for it! 4 day weekend ahead. Part of it will be spent celebrating the new prez, but most of it will be just relaxing. I'll see if BHK wants to go on a little date maybe, too.

Low today of 7 degrees Fahrenheit.  (High of 22). If it's going to be this cold, it could at least snow, but it is as sunny as can be.

Trimmed back the beard - may return to goatee on the weekend. It's really good at fighting the cold, though.

Rest in Peace, #6 and Mr. Roarke. I hope the new islands suit you both, glad you spent so much time on this one.

---
A cat named Sammy was usually seen lounging in the window of the post office in Notasulga, Alabama until someone complained.
*
“They said ‘This is a federal building and he doesn’t pay federal taxes so he can’t come in’,” said postal worker Rochelle Langford.
*
But Sammy’s supporters think they have found a way around the banishment. They have rented a post office box in his name! 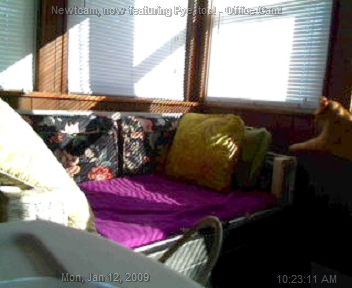 Forgot to post this on Monday - Newt leaps in from the side of Newtcam! BHK said that something got into his head and he went on a tear through the house---up and down the stairs and jumping on all the cat furniture. Pye and BHK as usual looked at him like he was a crazy orange beast :D

7 years ago - cool invention poll, thoughts about human rights progressing, magic spell over Taiwan, books read, How to take a punch, and my first notification that I was being published in UA2.

8 years ago - Custard the Dragon, Beautiful and Not-so-beautiful Words, Botticelli reminding me of mah sweetie, Michelanglo on Censorship, and a few dead links.

9 years ago - Newt was Neutered!