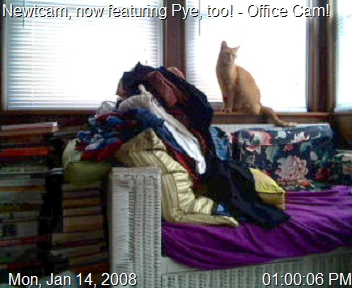 
Call for Guantanamo to be closed I wonder how that'll hit Kev and Paul?

The chief of the US military has said the notorious Guantanamo Bay prison camp should be closed as soon as possible because negative publicity about the treatment of terror suspects has been "pretty damaging" to America's image.

"I'd like to see it shut down," Admiral Mike Mullen said in an interview with three reporters who toured the Cuba detention centre with him on his first visit since becoming chairman of the US Joint Chiefs of Staff in October.

Friday marked the sixth anniversary of the prison's opening in January 2002.

Admiral Mullen stressed that a closure decision was not his to make and that he understood there were numerous complex legal questions the administration believed would have to be settled first, such as where to move the prisoners.

The admiral also noted that some of Guantanamo Bay's prisoners were deemed high security threats.

During a tour of Camp Six, a high-security facility holding about 100 prisoners, Admiral Mullen got a first-hand look at some of the cells, with one prisoner glaring at him through his narrow window as US officers explained how they maintained almost constant watch over each prisoner.

Admiral Mullen, whose previous visit was in December 2005 as head of the US Navy, noted that president George Bush and defence secretary Robert Gates have also spoken publicly in favour of closing the prison. But he said he was unaware of any active discussion in the administration about how to do it.

Asked why he thought Guantanamo Bay, commonly dubbed Gitmo, should be closed, and the prisoners perhaps moved to US soil, Admiral Mullen said: "More than anything else it has been the image -- how Gitmo has become around the world, in terms of representing the US."

Critics have claimed that detainees have been mistreated in some cases and that the legal conditions of their detentions are not consistent with the rule of law.

He said he was encouraged to hear that the Guantanamo population had shrunk to 277 - at one time it exceeded 600.

1 year ago - pye in lockup, on the way home pic